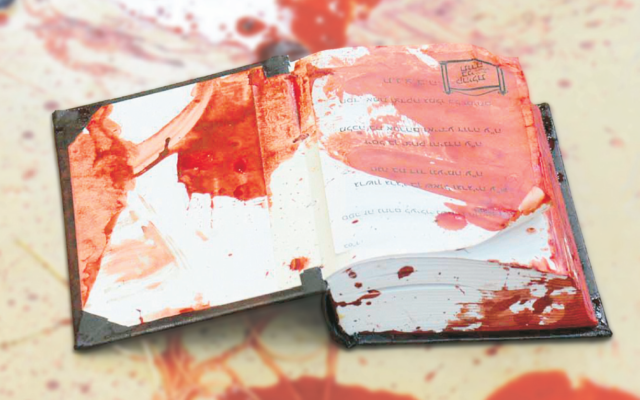 TONY Abbott has described the terrorist attack at a Jerusalem synagogue that killed five people as “an act of pure evil”.

Four rabbis were murdered while praying on Tuesday, when two Palestinian terrorists stormed into the Bnei Torah shul in Har Nof with guns, knives and an axe. A Druze police officer, the first on the scene, died later from wounds sustained during a gun battle with the terrorists.

“Australia condemns the attack at a synagogue in Jerusalem,” Abbott told The AJN on Wednesday.

“The killing of innocent civilians has no place in our world.

“As Australians, we stand for freedom and for the right of all people throughout the world to choose their way of life and their way of worship. We always have and we always will.

“This is an act of pure evil and it is condemned by the Australian government,” Abbott said.

Opposition Leader Bill Shorten also condemned the attack and said, “Nothing can justify senseless violence against innocent people going about their worship.

“Our thoughts are with the victims and families of all those who were killed and injured in this horrific attack, and in other recent violence,” Shorten said. “It is vitally important for all Israelis and Palestinians to do all they can to lower tensions, reject violence, and renew their commitment to the peace process.”

Israel’s Prime Minister Benjamin Netanyahu said that the country is in the middle of a terrorist assault focused on Jerusalem.

“The human animals who perpetrated this slaughter were full of hatred and incitement, deep hatred and terrible incitement against the Jewish people and its state,” he said

“But what is outrageous is not only the brutality of the murder but the shouts of joy in Gaza, in Bethlehem and in other places.”

He laid the blame at the feet of the Palestinian Authority (PA) and its president Mahmoud Abbas for “constant incitement against the very existence of the State of Israel” and for treating terrorists as “heroes of Palestinian culture”.

The sentiment was echoed by Colin Rubenstein, executive director of the Australia/Israel & Jewish Affairs Council, who said, “Anyone who truly condemns this attack and genuinely does not want to see similar acts in future must also demand that this pattern of repeated, inflammatory incitement ceases.”

Urging Israelis to stay calm, Netanyahu said, “I call on you to show maximum alert and to respect the law. We will settle accounts with all of the terrorists and those who dispatched them.

“We have already proven that we do this, but let nobody take the law into his hands, even if tempers flare and blood boils.”

Executive Council of Australian Jewry president Robert Goot said the organisation was “shocked and appalled” by the attack.

“The Australian Jewish community shares the sorrow, grief and anger caused by this barbaric crime and we pray for souls of the murdered and for their families to be granted strength at this terrible time,” he said.

“We are also appalled by the events that immediately followed this attack. In Gaza, mosques broadcast words of praise for the terrorists through loudspeakers, while sweets were handed out on the streets to celebrate the crime. There were similar scenes in the West Bank.

“Whilst we acknowledge the condemnation of the murders by PA President Mahmoud Abbas, we condemn the contradictory statements of  Fatah representatives, applauding this vicious and brutal attack on Jews.”

Organisation of Rabbis of Australasia president Rabbi Meir Shlomo Kluwgant said this act of terror will affect every Jew across the world.

“As the head of the religious leadership in Australia the images of innocent murdered Jewish rabbis covered by their own prayer shawls in which they were praying only moments before, with blood spilled beside the on the floor, penetrates deep into my heart.”

A prayer book lies on the floor after the massacre at Bnei Torah Synagogue in Har Nof, Jerusalem. Photo: AFP Photo/HO/ GPO/Kobi Gideon.