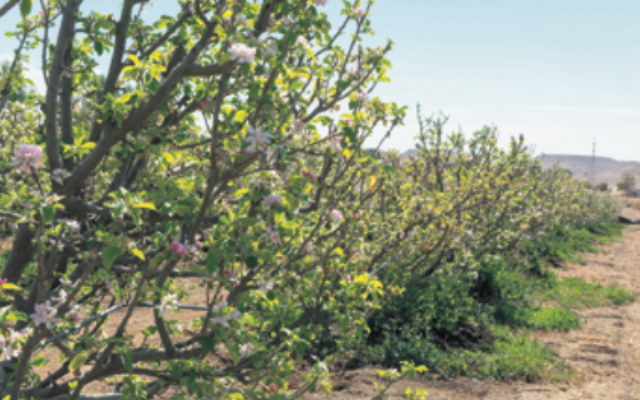 Agriculturally based matters are intrinsic to halachah. In fact, the first of the six orders of the Mishnah – the basis of what is popularly known as the Oral Law, is Zera’im (seeds), the laws relating to farming and the produce of the land.

Among these laws and the subject of its own tractate is orlah. For the first three years of a tree’s life, its fruits are called orlah. We may not eat them or derive benefit from them in any other way; they are rather left to decay in the field. (Note that this is one of the few agricultural laws which apply outside the Land of Israel, albeit with some leniencies.) Subject to circumstances oral laws may also affect replanted trees/saplings.

Whether in or outside Israel, if one has a fruit tree to which the law of orlah would apply, the way to calculate the three years is somewhat complex. We do not count full years, but the number of Rosh Hashanahs which pass. Thus, if a tree is planted six months before Rosh Hashanah, its second year begins six months rather than a full year later.

However, there is a minimum amount of time which must pass before the period prior to the first Rosh Hashanah is counted as a “year”. This is a month and a half. The reason is because we assume two weeks are needed for a seed or sapling to take root, and another month must pass to minimally be considered a year. Thus in practice, a seed or sapling must be planted by the 15th of the month of Av for its first year to be complete on Rosh Hashanah.

After the third Rosh Hashanah, the tree’s new fruit is not permitted immediately, but only the fruit which began forming after Tu b’Shevat. The reason for this is that although Rosh Hashanah is considered the birthday for trees, the birthday for fruits is later, on Tu b’Shevat. Thus, another 41⁄2 months must pass for the fruit to be considered a product of the new year and permissible. (So much for the law of orlah as it involves Tu b’Av – I am indebted to Aish for the clarification used in the preceding paragraphs.)

Note however that the Tu b’Shevat matter does have implications for Australian gardeners that are not an issue in Israel as in the northern hemisphere Tu b’Shevat is between growing seasons whereas in Australia many fruits commence growth in our spring, meaning that it is only a year later that they fall into the category of permissible post- third year Tu b’Shevat growth. (The issue is irrelevant to fruit purchased in a shop; any Diaspora fruit shop does not require certification as fruit that is not definitely orlah is permissible outside Israel. Only in Israel do fruit and vegetable shops require certification.)

However, orlah aside there is another set of halachot with Tu b’Av implications, that relate to another agricultural mitzvah that is specifically applicable only in Israel. And that is the law of Shemitah – the Sabbatical year – with the coming year 5782 being such a year.

While the underlying logic is not identical – a matter that cannot be covered in these few lines – in regard to Shemitah too the rule of not planting fruit trees extends backwards from Rosh Hashanah to Av 16 in order that a tree planted prior to Rosh Hashanah take root prior to the one month period that precedes the relevant Rosh Hashanah. That month known as Tosefet Shvi’it – an addition to the seventh – can be compared to the way that we bring in Shabbat 18 minutes prior to sunset, thereby extending somewhat its holiness. In the case of Shemitah the extension is one month. And although the farmer may have no active part in a tree taking root during that one-month period, one still seeks to avoid it actually happening; basically because the Torah requires the land to rest (Vayikra 25:2) irrespective of whether we do the agricultural work. And so, in regard to Shemitah also, Tu b’Av has relevance – it is the last day for pre Shemitah planting of trees.

In conclusion however, it must be emphasised that the halachot of Shemitah are complex with many extending to vegetables and grains as well as trees. However, there are many leniencies applicable in the post-Temple era, especially in the context of our desire to promote Yishuv Ha’aretz – settlement of the land and its development in the contemporary era.

Nevertheless, while a farmer or garener in Australia is not concerned with fulfilling Shemitah laws, there are ways that they are relevant to us here in the Diaspora. Our global economy is such that it is not only in Israel that one might purchase Shemitah year produce subject yo certain rules that apply and are beyond the scope of this column. Halachot of Shemitah relate to export restrictions and also the time of year when such produce may be consumed (only while similar produce is still in the field, creating an issue in regard to canned and otherwise preserved produce).

Thus as the months elapse and such produce grown during Shemitah makes its way to our shores there is real relevance to us of Hilchot Shemitah. No doubt we will hear and read much more on the theoretical background and practical relevance of these topics over the coming year.

(Note: This column is not a halachic dissertation to be used as a reference regarding practical matters. I am only drawing attention to the existence of halachah relevant to the subject – practical questions need reference to appropriate rabbinical authorities.)