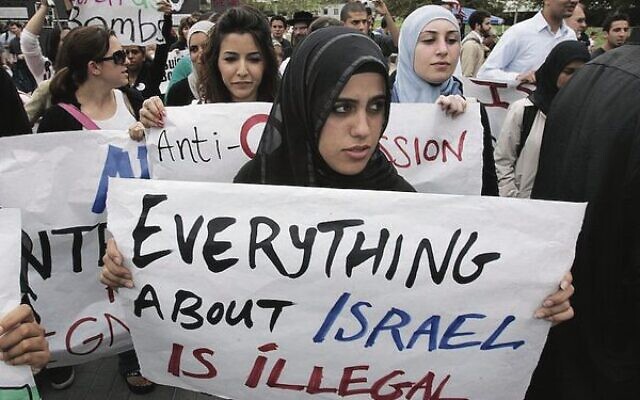 Students protest at an anti-Israel demonstration at the University of California, Irvine. Photo: Mark Boster/Los Angeles Times via Getty Images/JTA

Twenty years ago, I had one of my most memorable Jewish educational experiences. There I was, an American modern Orthodox 16-year-old in a Jewish school in Baltimore called Beth Tfiloh, listening to an Australian choir from Moriah College performing an Israeli song, Abanabi by Izhar Cohen (which happened to win the Eurovision contest in 1978).

This was my first time meeting Australian Jews. I remember that some of the faculty were unsure of how we would get along. We had different accents, followed different sports and sometimes our Jewish practice was not exactly the same.

But we also had a lot in common. In addition to speaking English and being teenagers, we had a shared love of Israel, Zionism and the Jewish people.

Fast-forward 20 years. This week my wife Raizie and I are travelling to Australia from South Florida for the first time. Of course, we’re excited to see all the tourist attractions.

As the executive vice-president of a Jewish education and media not-for-profit and a former Jewish high school principal, I am also coming to Australia to present at the ZFA conference, and think about Israel and Jewish education for teens with my Australian colleagues.

What could the American Jewish community learn from the Australian Jewish community, and vice versa? How could our two communities work together to give our students the best Jewish and Israel education possible and address the challenges that they face today?

I want to invite Australians to think about what it can look like to be a Zionist right now in America, especially for many of our young people. I was recently in Denver showing one of our newest films at OpenDor Media, Unsafe Spaces: When being Jewish means you don’t belong. Through interviews with student leaders, the film explores the challenges of being a Zionist on campus today and being marginalised from progressive spaces just for being Jewish.

Without making sweeping generalisations (Jewish students do not all share one monolithic experience), that comment says a lot. Everyone knows that Israel is a tough subject, but in the last 20 years, something has been changing in the US where one needs to be cognisant of one’s surroundings before declaring oneself a Zionist.

Based on the conversations I’ve had in the community, there are probably both similarities and differences between what is happening in Australia and America.

One of the similarities (which I would like to learn more about) is something Judy Maltz recently wrote about as part of her series on Jewish life in Australia in Haaretz. According to Maltz, Australian Jewish students, like their American counterparts, “often find they are not welcome in progressive spaces unless they renounce their Zionism”.

Jewish students in America and Australia alike understand the challenges of anti-Zionism and antisemitism. We ought to seek ways to work together to address this shared challenge. But there is also a key difference between the two communities in terms of how this has impacted their Zionist identities.

In America, surveys have found that young Jews are less connected to Israel compared with older ones, and a poll published last year showed that 20 per cent of young American Jews do not believe Israel has a right to exist. Consider the milieu in which Jewish Americans are growing up, where according to a recent survey from Axios, 56 per cent of Americans between the ages of 18-29 view Israel unfavourably, compared to only 27 per cent of Americans over 65.

But in Australia, that does not seem to be the case. In her piece, Maltz cites a 2017 survey by the Australian Centre for Jewish Civilisation that found that “young Australian Jews were even more likely than their parents and grandparents – albeit by a very small margin – to identify as Zionist”. The survey also found that three out of four Australian Jews aged 18 to 29 considered themselves to be Zionists.

I’m eager to learn from Australian Jewish educators and professionals, and hope to “export” that back to the American Jewish community.

I’m also excited to share firsthand about our nuanced approach to Israel education at Unpacked for Educators, which complexifies and humanises the Israeli-Palestinian conflict, Israeli history and Jewish history.

What do I mean precisely by a “nuanced approach” to Israel and Zionist education? I mean that, whether we are creating videos, podcasts, films, articles or educational resources, we are committed to showing the wide contours of dispute within Israeli society and the various layers and textures to the story of Israel. We want people to see Israel as it is, both romantic and beautiful, and imperfect and complicated.

We want our young people to understand that Zionism is a common platform, not an exclusive ideology, as AB Yehoshua of blessed memory said. We want them to view Zionism as a broad tent, or even multiple micro-tents with different portals and access points for entry. We want our young people to unequivocally embrace and engage with Zionism while also asking the tough questions and bringing the story of the Palestinians into the conversation.

Through working with Jewish day schools and supplementary schools across the globe, including in Australia, we have seen how our nuanced approach resonates with students and allows room for them to deepen their own Zionist and Jewish identity, grapple with tough questions and identify themselves within a spectrum of positions.

I love shrinking the Jewish world. One of the reasons we have a collaborative program that brings together educators in Jewish schools in Australia, America and around the world, from across the political and religious spectrum, is to make sure we are all learning from each other. Regardless of our religious denomination, political affiliation, socioeconomic situation or geographic location, we can all connect and develop community through this content and curriculum.

Hopefully, we can still all sing Abanabi together.

Dr Noam Weissman is executive vice-president at OpenDor Media, which is a leading Jewish education not-for-profit media company for the 21st century. He is presenting at the ZFA Jewish Educators’ Conference this weekend.