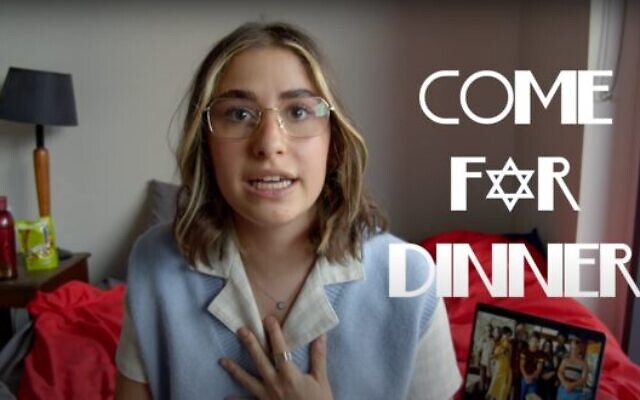 “They say ‘write what you know’ and considering I’m a 21-year-old who has been stuck at home with my parents and brothers for the past two years, I would say I’m pretty familiar with both Judaism and the dynamics of a Jewish family.”

Studying at Swinburne University of Technology in Hawthorn, Timna Katz took this information and ran with it for her honours film, which centres on everything a Jewish comedy should have.

Funnily enough, it was a conversation with her dad that cemented the idea for Timna.

“I asked myself, what could I do to disappoint and horrify my parents? I told my dad the idea to which he replied, ‘Is this where your HECs is going?’ so I knew I had to produce it,” she laughed.

Come For Dinner focuses on Avigail, a young Jewish filmmaker who can only find work in the pornography industry, and who desperately hides this from her religious Jewish family. The action is set over Rosh Hashanah, which Katz said was a deliberate choice.

“Rosh Hashanah is the start of the Jewish New Year and a day many Jews use to purge themselves of anything that may bring on a bad year,” she said.

“As the film explores guilt and denial, this was the perfect Jewish holiday for Avi to experience a self-induced mental breakdown from the guilt of her secret life.”

Over Rosh Hashanah, various family secrets are discovered, and the three siblings threaten to expose each other before a young family member alerts the entire household to not only Avi’s job, but her brother’s role in the industry too.

“I think people sometimes get caught in a mindset of blaming others for their own shortcomings. It is easy to blame our parents and upbringing to mask a deeper inner disappointment,” said Katz.

“Avigal the pornographic filmmaker, spends the entire film convincing herself that her decisions aren’t her fault, and she can get out of the hole that she has fallen into. However, at heart, she knows she dug it herself.”

Importantly, Katz points out that her planned film will never actually show anything explicit. Rather, it is all referential.

Katz is currently writing a script for the film and plans to direct it next year. In fact, the team is currently in the casting phase, looking for talented Jewish actors to play members of the family.

The filmmaker hopes that this is just the beginning for her.

“I really enjoy conceptualising stories and helping them go from just an idea to a film or web series or television show,” she said.

“Even though it’s hard work, finishing a long and arduous project is the most satisfying feeling.”

Hoping to be a film producer or TV showrunner one day, for Katz, Come For Dinner is just the beginning.

“[The film] has given me that small bit of hope I’ll be able to conceive, produce and distribute content that I am passionate about at a professional level.”