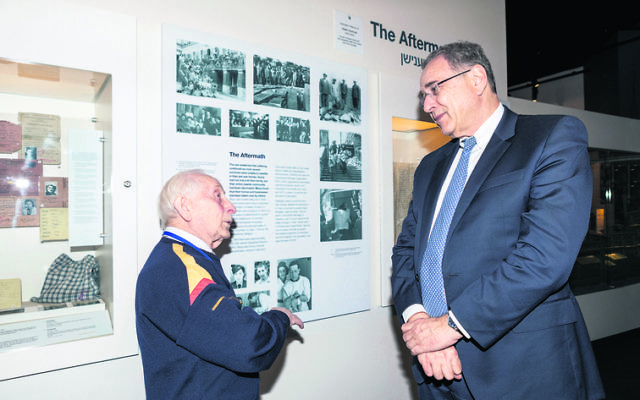 ON his first visit to the Jewish Holocaust Centre (JHC) on Monday, Israel’s ambassador Mark Sofer was given a comprehensive briefing on the centre’s future expansion plans and was shown through the museum.

At a meeting with senior board members and staff, headed by co-presidents Pauline Rockman and Sue Hampel, and including curator Jayne Josem and community relations coordinator Michael Cohen, Sofer was briefed on the JHC’s widespread plans.

These include the proposed expansion of the centre’s facilities and on its first-ever capital raising venture that will soon be unveiled. He was also updated on moves for the JHC to achieve full membership of the International Holocaust Remembrance Alliance, the global body to which major Holocaust museums around the world are constituents.

The envoy was impressed with the high numbers of secondary school students who visit the centre under its school education program and, in fact, his tour coincided with a visit by students from Mentone Girls Secondary College and Our Lady of Mercy.

Meeting survivor guides Abe Goldberg and Lusia Haberfeld, the ambassador was shown around the museum by Josem and the guides, immersing himself in its many exhibits. Goldberg explained to Sofer about documents he and others had buried, bearing witness to the Shoah, which were retrieved after the war. Haberfeld related her memories of Israel’s first prime minister David Ben-Gurion visiting the Bergen-Belsen concentration camp where she found herself shortly after its liberation.

After the tour, Sofer told The AJN, “I’ve been to many Holocaust museums and Holocaust centres around the world but this is unique in many ways. The [Jewish] community in Victoria is 50-55,000, and to have a centre of this excellence – for no other word will do – is really mind boggling.

“I think the emphasis the centre has on education, on bringing youngsters, around 25,000 a year, from around Victoria, to understand what the Holocaust meant is truly moving and worthy in every way,” he said. “I’m leaving here an eye opener for me – to hear some of the stories, to meet some of the survivors and the leadership.”

He took some time to meet with Dassi Erlich and her sister Elly Sapper, who were allegedly sexually abused by Malka Leifer when Leifer was the principal of the Adass Israel School in Melbourne. Erlich and Sapper will fly to Israel soon for Leifer’s next extradition hearing.