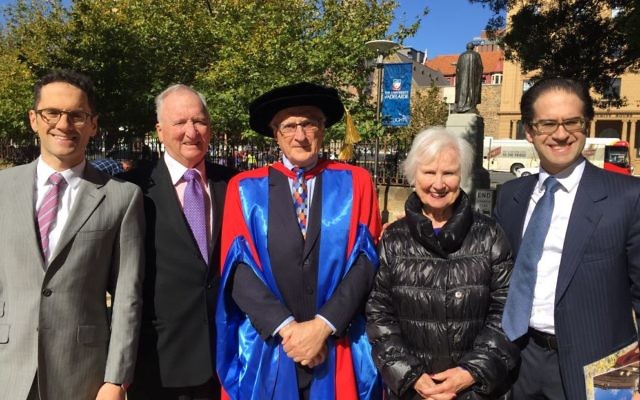 PROFESSOR Paul Zimmet received an honorary doctorate from the University of Adelaide last week, almost exactly 75 years to the day that his father graduated in medicine from the same university.

Zimmet, who is one of the world’s top diabetes experts, said he was surprised to learn about his most recent honour. “It blew my mind, especially as I was not such a great student!” he told The AJN.

Zimmet delivered a powerful oration last week when he shared the story of his parents, who escaped Europe only months before the Holocaust.

The professor implored the new graduates to “demonstrate the highest level of respect, humanity and support to the many who have sought asylum here, just as Australia and the University of Adelaide have done for our family”.

“Being aware of the escalating threat and terror of Hitler’s Nazi Germany in Austria, in 1937, my father applied for visas to Australia and the United States … The Australian visas arrived first.”

Professor Zimmet’s parents and eldest sister began their sea voyage to Australia in January 1939, leaving behind his family who perished “in the horrendous gas chambers”.

“The only survivor was my mother’s younger brother,” he added.

When Jacob realised his qualification would not be recognised in Australia, he re-qualified in medicine at the University of Adelaide.

Zimmet graduated from the University of Adelaide with a Bachelor of Medicine and Bachelor of Surgery in 1965. He boasts an extensive list of achievements since, including Professor of Diabetes at Monash University, founder of the International Diabetes Institute which merged with the Baker Institute in 2008, recipient of an Honorary Doctorate from Tel Aviv University and he was twice recognised by the Australian government.