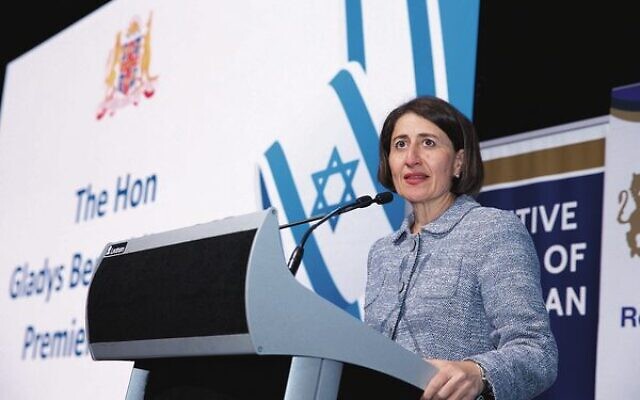 DEPARTED Premier Gladys Berejiklian was “deeply disappointed” she was unable to make an official visit to Israel, NSW Jewish Board of Deputies (JBOD) president Lesli Berger told The AJN this week.

Berejiklian resigned last Friday amid an Independent Commission Against Corruption (ICAC) investigation into grants she awarded in the Wagga Wagga electorate while it was held by former disgraced MP Daryl Maguire, with whom she was in a relationship.

The popular premier’s resignation comes as she was about to lead the state out of its COVID-19 lockdown.

“She was unable to attend that conference in Israel due to the pandemic, and now of course that will no longer happen,” Berger lamented, adding it was also one of his own regrets.

He described the departed premier as “an incredibly warm friend to the Jewish community”.

“She always made herself available to meet with us on critical issues, to attend key events, and she always also demonstrated her friendship with actions,” he said, citing the $2 million in security funding she granted the community prior to the 2019 state election.

“[She was] always helpful, wanting to provide assistance and her friendship was deeply appreciated and she will be missed,” Berger added.

“I have known Gladys for about 20 years, from my days as a young political activist, and I hope our friendship continues.”

“We look forward to maintaining our strong working relationship with both in their new positions,” he said.

“Perrottet, in his previous position as Treasurer, recently announced the funding of over $6 million for the Sydney Jewish Museum to assist with its expansion, creating a vital link to ensure the Holocaust is always remembered by future generations.”

Meanwhile, Berger also paid tribute to former Nationals leader and Deputy Premier John Barilaro, who independently resigned after Berejiklian, thanking him for “his service to the state and consideration and support of the Jewish community throughout his time as Deputy Premier and as a Minister”.

“We would also like to congratulate the new NSW Deputy Premier and leader of the NSW Nationals Party, Paul Toole, and Deputy Leader Bronnie Taylor both of whom are friends of the Jewish community and multicultural communities throughout the state,” Berger said.

“We wish them every success in the work they are to undertake on behalf of the state.”

“There has been no stronger friend for the Jewish community throughout her time as Premier, as a Minister and through her entire period in parliament,” he added.

Former JBOD CEO Vic Alhadeff spoke of the privilege of knowing Berejiklian since her election to parliament in 2003.

“She has been an unswerving ally, both to the community and personally,” he said.

“Gladys is a genuine and valued friend, and both the community and the state itself are the poorer for her departure.”

Australia/Israel & Jewish Affairs Council (AIJAC) director of international and community affairs Jeremy Jones said having known Berejiklian since before she was in parliament, “I can confirm that her friendship with the Jewish community is very genuine”.

“At her first engagement as Premier, she made a point of emphasising the importance of NSW being a place where people of all ethnic and religious backgrounds felt welcome,” he said.

“Dom Perrottet has also demonstrated his friendship with the community over the time he has been in Parliament, and AIJAC looks forward to continuing and deepening this relationship.”

Fellow members of parliament also paid tribute to Berejiklian, with Minister for Multiculturalism and former NSW Parliamentary Friends of Israel chair Natalie Ward saying she was “deeply saddened” by her resignation.

“Gladys Berejiklian has served NSW as an exceptional leader, showing strength, determination and courage under incredibly challenging circumstances,” she said.

“The [former] Premier has given her life to public service and has always put the people of NSW first.

“I, along with women across our nation, have admired Gladys’ incredible work ethic, her capacity to manage various crises, her stoicism and grace.”

Current NSW Parliamentary Friends of Israel chair Scott Farlow said, “The NSW Jewish community have lost a striking supporter in Gladys Berejiklian, a leader who had a strong understanding of and affinity with Israel and the Jewish community throughout NSW.”

Vaucluse MP Gabrielle Upton said Berejiklian “was, and is, the closest of friends of our vibrant Jewish community in NSW”.

“We are so, so sad that she has stepped away from the leadership of our great state,” she said.

Both Farlow and Upton welcomed Perrottet to the post, Farlow saying “I’m sure we’ll see in him a similar strong supporter of Israel and the Jewish community” and Upton noting he is already very well known to, and will continue to strongly support, the community.

“There is plenty of time for politics after the pandemic is over. No one can fault her dedication and hard work on behalf of the people of NSW,” he said.

“She was the granddaughter of Armenian genocide survivors and she had an affinity for the Jewish community and Sydney’s multicultural communities.”

Other communal tributes came from the Zionist Federation of Australia (ZFA) and the Australian Jewish Association (AJA).

ZFA president Jeremy Leibler said, “She has been a true friend of the Sydney Jewish community for many years, and a strong supporter of business and cultural ties with Israel.”

The AJA, meanwhile, said Berejiklian had “been an unapologetic friend of Israel and the NSW Jewish community.

“As Premier, she was a regular at communal and Israel related events,” the AJA said.