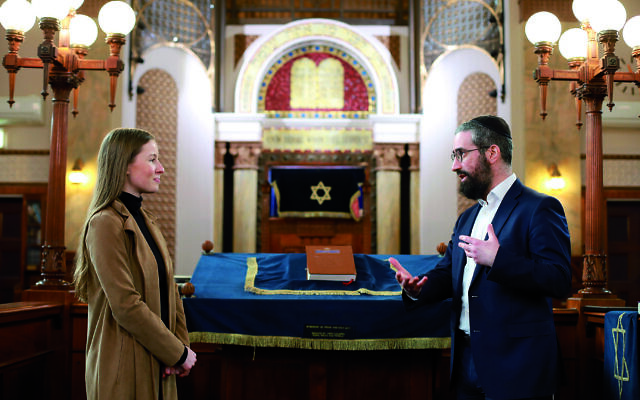 Apparently it’s obvious, but for those readers who haven’t figured it out yet, I am (sadly) not Jewish. Everyone I tell this to, always has the same answer: “You’re brave”. But my induction into the Jewish community these past four months has been nothing but fascinating, exciting and thought-provoking. It has added another layer to my life and an endless avenue to explore. As the Jewish community celebrates Rosh Hashanah, I thought this would be the perfect time to reflect on my time so far as an outsider looking in.

My first point that I want to stress is that I have never felt more welcomed. Every person I have met has given me their number and instructed me to call them if I ever needed to know anything. Others have helped me to pronounce Hebrew and Yiddish words and forced me to practice them until I finally get the hang of the very uncomfortable rolling of the “r’s,” and the equally uncomfortable “ch ‘’ sound. And others have welcomed me into their home on Shabbat. A couple of months ago, when Shabbat gatherings weren’t restricted, I experienced my first Shabbat service at South Caulfield Shule. I was quick to find a friendly face who told me she was in the middle of converting. She noted my curiosity and was proud to explain to me some of the details of the conversion process; excited to soon be able to call her and her children Jewish.

I was quickly swept up by the warm and welcoming Rebbetzin Sarah Rabin and UIA Victoria president Hayley Southwick, immediately feeling at ease in the most foreign of circumstances. I was welcomed into the home of Rabbi Daniel Rabin and Rebbetzin Sarah for dinner – a Shabbat I will always remember, but also might struggle to remember due to the vast amounts of whisky and red wine. After the welcoming of Shabbat, wine, washing hands and challah, Rabbi Rabin invited all 15 or so guests at the table – which to me felt like Christmas – to introduce themselves and to talk about why they had joined them on Shabbat. 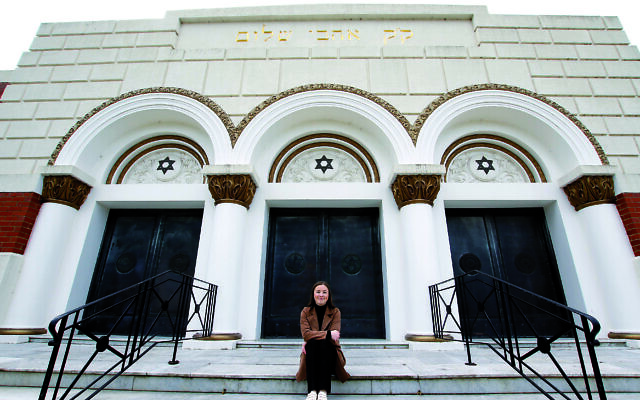 A local family sitting beside me who were also not Jewish spoke about how grateful they were to be included, having always wanted to connect with their Jewish neighbours. Another woman spoke about why she converted after being introduced to Judaism by her partner. She said the central reason was not because he was Jewish, but because she had fallen in love with the religion and the culture. This resonated with me. Since joining The AJN, I have been in awe of the community – the culture, religion and the traditions that bring everyone together. With a profound appreciation for family and community values, and a longing for some kind of cultural connection, I envy those who have been brought up in a Jewish household.

As someone mentioned to me recently, there are many formative experiences built into Jewish childhood and adolescence, like speaking in front of an entire congregation at your bar or bat mitzvah or being restricted from doing what your non-Jewish friends can do. It’s character building and something that us non-Jews miss out on. We got embarrassed singing the national anthem at school in front of one another, let alone giving prayer and singing in a second language.

Unlike traditions in non-religious communities that have faded due to a lack of culture and connection to heritage, through speaking to young leaders, I realised quickly just how strong the sense of Jewish identity is. I am yet to speak with someone who is not proud to call themselves Jewish. With brilliant day schools and an extensive pool of philanthropists that truly understand the value of Jewish education, this is not surprising, but it is still impressive to an outsider who has grown up in a very secular community, rarely hearing anyone speak about identity. Understanding the pride in Jewish identity became especially clear to me when I attended Zionism Victoria’s annual Yom Hazikaron commemoration event earlier this year. To be so far away from a place so many here call home or at least a spiritual home and to watch your people, your friends and family under almost constant threat of violence, is an extra weight unknown to most Australian’s today.  I’ve never known that feeling or even considered it, until I began in this job.

My curiosity and yearning to understand this quickly led me to begin learning everything I could about the conflict and about the history of Israel. I regularly now find myself in debates with friends on the topic and relish in arguing in support of Israel – calling myself a proud Zionist in the process. A trip to Israel is now firmly imprinted on my bucket list. Whether it be news from Israel, shule politics or grand achievements from members of the community, there is never a dull moment in the Jewish community. And while I have had an incredibly exciting couple of months, a good news cycle usually means terrible things are happening.

In high school I had many Jewish friends but had only witnessed a slither of the antisemitism that I am reporting on now. I failed to truly understand the extent of it and the rightful fear it can stir in the community. As a keen advocate for freedom of speech, I believe a spectrum of opinions should be cast into the public sphere. But when the uninformed become hateful and violent, leaving space for the incomparable to be compared to the Holocaust or Hitler, a line that everyone in society should realise is bold, red and drawn with permanent marker, is crossed.

Reporting on the community rallying peacefully in support of Israel during the latest violence – even after multiple threats of serious violence – was both inspiring but also frustrating. Having to hide away in Caulfield and restrict the exposure of the date, time and location, among other things, meant the thousands of non-Jewish Israel supporters across Melbourne struggled to know it was even on. This is not to say the organisers made the wrong decision; community safety is most important. But I was overwhelmingly frustrated watching supporters of one side of the conflict freely gather in the middle of the city, to rally with no fear of violence, while the Jewish community had to hide. Especially because this meant the pro-Palestinian voice washed out the pro-Israel voice for onlookers in the general community. It was very difficult to see friends of mine attend the pro-Palestinian rally, chanting “River to the sea, Palestine will be free,” and to see others make up their mind on the conflict over seeing a few “Israel Apartheid” placards and a couple of social media posts.

On a more general note of division, as someone with a foot in two communities, I worry that the divide between the new atheists of today who despise religion without understanding it, and those who are religious, is deepening and has caused a major disconnect between mainstream and faith communities. When I told my friends and family I had got this job at The AJN, almost all of them assumed I was reporting on issues affecting the ultra-Orthodox community and it was quickly evident that they had no idea about the mainstream Jewish community. But why would they? And why would community members who have their life and career embedded in the Jewish community branch out and connect with people in the mainstream community? 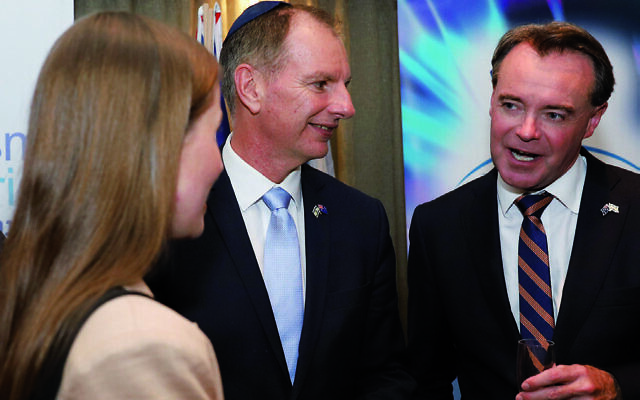 Jewish politicians such as Josh Frydenberg, David Southwick, Josh Burns, Mark Dreyfus, Julian Leeser and Walt Secord, along with leadership at Australasian Union of Jewish Students and young Jewish entrepreneurs, all bridge that gap in one way or another. I think they’re a vital tool in helping outsiders understand and care about the issues that face the community. Another subset in the community who I have found to be unsurprisingly crucial in my Jewish community journey are rabbis. One afternoon, a few days after a discussion about religion, Caulfield Shule’s Rabbi Yaakov Glasman – the first rabbi I had the pleasure of meeting – dropped off a copy of Rabbi Lord Jonathan Sacks’ book, The Great Partnership, to The AJN office. While I admit that I do get stuck on the heavy stack of biblical terms, I have found the book to be a vital tool for my Jewish learning.

One of the most interesting parts of the book so far for me has been Sacks’ explanation of the differences between Judaism and Christianity. He discusses how followers of Christianity live under the grip of sin – your thoughts are constantly subject to judgement. Whereas under Judaism – as you all know – you are judged on how you behave, rather than what you think. In a world where people put so much pressure on themselves to be perfect and mental health issues are skyrocketing, living your life knowing your God only judges you on your actions is a God everyone should at least pretend to live under.

However, growing up, I struggled to see the true value of religion and never consciously recognised that the values I had grown up with were based on Judeo-Christian values. I was blind to the connection between science and religion and stubbornly refused to believe in anything I couldn’t see with my own eyes.
While that ignorance has slowly dissipated over the past few years, this book has given me an extra window into the beauty and uniqueness of Judaism. “There is absolutely nothing in science – not in cosmology or evolutionary biology or neuroscience – to suggest that the universe is bereft of meaning,” writes Sacks. “Science is the search for explanation. Religion is the search for meaning.”

This may be evident to those who have grown up questioning this concept, but for a former public school girl who was never exposed to religious concepts or the argument between the two realms, this is a new way of looking at the world and one that has changed my entire mindset. While some community members might
have queries as to whether someone who is not Jewish can report on Jewish community affairs, I like to think that this means I have the ability to report without ingrained bias and give fair exposure to each individual, group and organisation.

Journalism is about grasping what you don’t know and working eagerly to piece together the missing facts. There is a lot I don’t know about Judaism and the community, but with every person I meet and every article I write, I feel like I am slowly but surely unfolding what is a complex but very special community. Who knows, the community might have another convert on their hands.