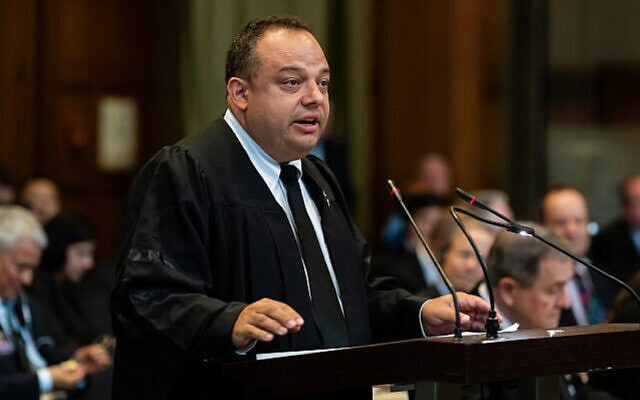 Tal Becker at the International Court of Justice in The Hague.

ISRAELI Middle East analyst Dr Tal Becker, who grew up in Australia, is paying a return visit to speak about relations between Israel and the Diaspora, a subject at the core of the Shalom Hartman Institute in Jerusalem, where he leads educational initiatives on Israel and the Jewish world.

The former Leibler Yavneh College student and Bnei Akiva merakez – who was a lead negotiator in Israeli-Palestinian peace talks – is being brought to Australia by the Australia/Israel & Jewish Affairs Council (AIJAC), whose Rambam program visitors he has briefed during their Israel visits. Becker plans to update the Jewish community on the Hartman Institute’s Engaging Israel series, seen in North America as the premier education program on Diaspora engagement.

“We need the language and categories and imagination of a Jewish peoplehood that adapts to this 21st century Jewish reality.

“If you’re arguing in that conversation, that itself is part of our collective identity … argument and disagreement is inherent in, and almost essential to, the Jewish people’s character. It’s not a bug, it’s a feature.

“If you look at the Talmud, it’s a record of Jewish conversation, where we teach the view we don’t follow. We manage to hold the community together by respecting the legitimacy of the things we disagree with and insisting they be taught and included,” argued Becker.

“We need to have a big enough story of Israel that a lot of people have an entry point in their relationship,” he said.

“We can’t treat Israel like it’s a synagogue, where if we like what the rabbi’s saying, we’ll go to that shule, and if we don’t then we’ll have a breakaway minyan. Israel is a state, and that means we don’t necessarily get to have it run according to our specifications.

“You can love Israel and have a relationship with Israel without agreeing with every aspect of it.”

Dr Tal Becker will speak on “Israel: Trump, the Palestinians and the Arab World” at Caulfield Shule, Sunday, December 1, 7.30pm, in an event sponsored by AIJAC, Caulfield Shule and the Anti-Defamation Commission. Admission is $8 (concession $5). Enquiries: AIJAC, phone (03) 9681 6660.

He will also speak at Central Synagogue on Tuesday, December 3, 7.30pm, in an event sponsored by AIJAC, Central Synagogue, the Zionist Council of NSW and the United Israel Appeal. Enquiries: AIJAC, phone (02) 9360 5415.