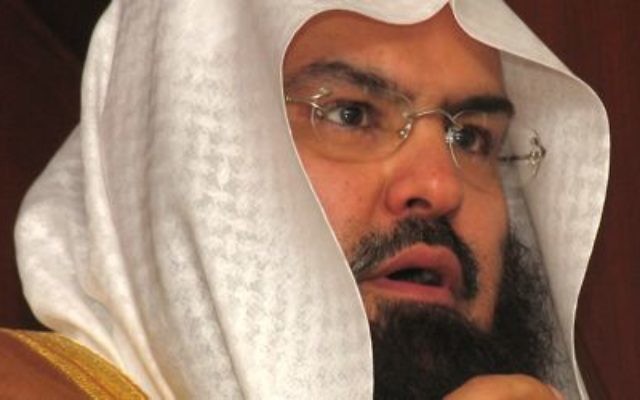 PLANS to bring a controversial Saudi imam, famous for spouting anti-Semitic and anti-Israel hate speech, to Australia, have provoked an angry response from communal leaders.

Abdul Rahman Al-Sudais (pictured), who has reportedly called for Jews to be “terminated” and labelled Jews “monkeys”, “pigs” and “the scum of the earth”, is scheduled to appear at the Australian Islamic Peace Conference (AIPC) in March.

“They are killers of prophets and the scum of the earth,” Al-Sudais is reported to have said on Saudi television in 2002. “These are the Jews, a continuous lineage of meanness, cunning, obstinacy, tyranny, evil, and corruption. They sew corruption on earth.”

Al-Sudais was refused entry to Canada in 2004 and was banned from speaking at a conference in the US.

A spokeseperson for the Department of Immigration and Citizenship told The AJN while they could not discuss specific cases, “There are provisions within section 501 of the Migration Act  that allow the minister to refuse a visa, where a person is found not to be of good character.”

Nina Bassat of the Jewish Community Council of Victoria said the AIPC had “failed abysmally” in its efforts to promote peace.

“If the aim of the Australian Islamic Peace Conference is to create publicity and divisiveness by bringing to Australia a man who is known for his intemperate and corrosive language, then the organiser has ­succeeded,” Bassat said.

“If the aim is to ‘build bridges between the Muslim community and mainstream Australia’, … then he has failed abysmally.”

President of the Executive Council of Australian Jewry Danny Lamm said: “If the reports of his inciteful rhetoric about Jews is correct, those hate-filled messages are unwelcome in Australia.”

The organiser of the conference, Waseem Razvi, had not responded to requests for a comment at the time The AJN went to press.