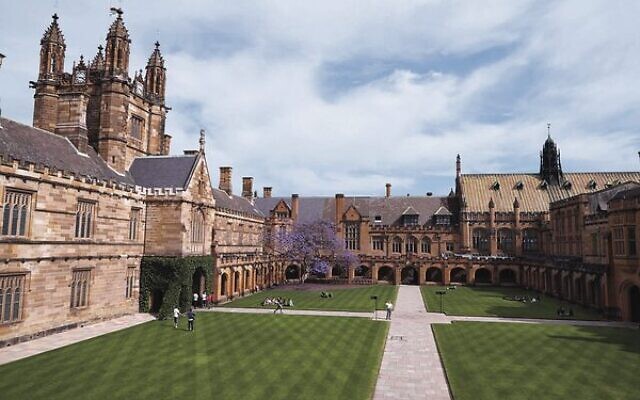 The University of Sydney. Photo: Knowledgeispower3

A one-sided University of Sydney (USYD) Students’ Representative Council (SRC) motion calling Israel an apartheid state and accusing it of genocide “does not represent the position of the university”, a USYD spokesperson said this week.

The motion, which passed with 16 votes in favour, three against and three abstentions last Wednesday, said Israel was “brutally established through the expulsion of 85 per cent of the Palestinian population and the murder of 15,000 people”, expressed solidarity with Palestinians “fighting back against daily repression and violence” and stated, “It is important to build a fighting, radical Palestine solidarity movement in Australia.”

“The SRC is run by students and operates independently of the university. The SRC’s motion does not represent the position of the University of Sydney,” the USYD spokesperson said.

“All our community should feel safe and welcome on our campuses, and we do not tolerate antisemitic language or behaviour.”

Australasian Union of Jewish Students (AUJS) vice-president Alissa Foster said, “Picking and choosing from a series of complex historical events misleads the general student population, and is insensitive to those students directly impacted. While expressing solidarity with Palestinians is one thing, the motion rather falsifies the story of the land of Israel.

“This comes after the Student Union passed a motion commending the boycott of the Sydney Festival in February,” she said.

“Since then the Student Union has been reluctant to engage with AUJS, leaving Jewish students feeling unheard by and uncomfortable with their representative body.”

NSW Jewish Board of Deputies CEO Darren Bark said, “This divisive, hateful and one-sided rhetoric has no place in our tolerant and multicultural society.”

Executive Council of Australian Jewry co-CEO Peter Wertheim said the USYD SRC “has a long history of supporting actions that show antipathy towards Israel’s very existence and towards students who support Israel’s right to exist”.

“It seems that they are opposed to racism against everyone except Jews. Their statements condemning antisemitism are empty and self-serving. Their idea of what constitutes antisemitism flies in the face of what most Jewish people understand it to be,” he said.

“We call on it to rescind this discriminatory and completely improper motion.”

The AJN emailed a number of questions to SRC president Lauren Lancaster. A response was not received by press time.