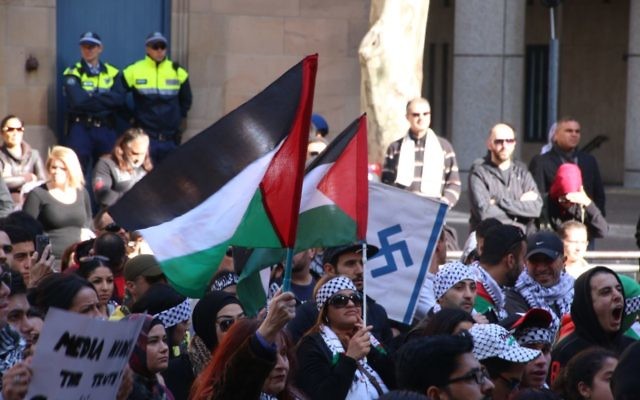 “ISRAEL is an illegitimate state. Israel has no right to exist,” shouted the speaker, to thunderous applause and cheers from the thousands packed into the square.

Flying alongside the sea of Palestinian flags were also Hezbollah flags, Jihadist flags and signs equating Israel with Nazi Germany.

But this wasn’t in Gaza or Ramallah. It wasn’t in Tehran, or even Cairo. It was Sunday’s pro-Gaza rally at the Town Hall in Sydney.

And while the event’s MC tried to point out that the rally was against Israel’s military operation in Gaza and not against Jews, “anti-Semitism was flying high”, according to Executive Council of Australian Jewry (ECAJ) research officer Julie Nathan.

“It was open, unashamed and palpable. The images through posters and flags were not just anti-Israel, but anti-Semitic to its core,” she said.

“The MC for the rally accused ‘the Jews’ of ‘burning people’ then stated that ‘Our struggle is not against Jews or Judaism but against the Jewish State’. One dreadful act allegedly by a handful of renegade Jews becomes a crime of which all Jews are held guilty – a classic case of anti-Semitism.”

Speaker after speaker condemned Israel’s military operation in Gaza, with Rhiannon accusing it of targeting civilians.

There was no mention of Hamas firing their missiles from civilian locations and using women and children as human shields. Other charges against the Jewish State included apartheid, ethnic cleansing and denial of basic human rights.

At the conclusion of the speeches, the crowd marched through the streets of the city chanting, among other things, “From the river to sea, Palestine will be free,” and at one point, “Khaybar Khaybar ya Yahud jaysh Muhammed saufa ya’ud [Khaybar Khaybar o Jews, the army of Muhammed shall return].”

At a similar rally in Melbourne on Saturday, speakers said Israel “celebrates the slaughter of children”, “is driven by colonial genocide” and “sees every Palestinian as an enemy”.

Banners accused Israel of being a “terrorist state” while marchers chanted “Israel out of the Middle East”.

“While there is a place for legitimate criticism of Israel, insidiously equating Israel’s actions to Nazi Germany’s systematic program to exterminate the Jews of Europe during the Holocaust and the use of banners with the Star of David intertwined with a Swastika go beyond acceptable criticism and cross into unadulterated anti-Semitism,” he said.

“I am also troubled that speakers denied Israel’s right to exist. This is a disturbing trend which must be met with condemnation by Australian-Arab leaders and other communal and political figures.”