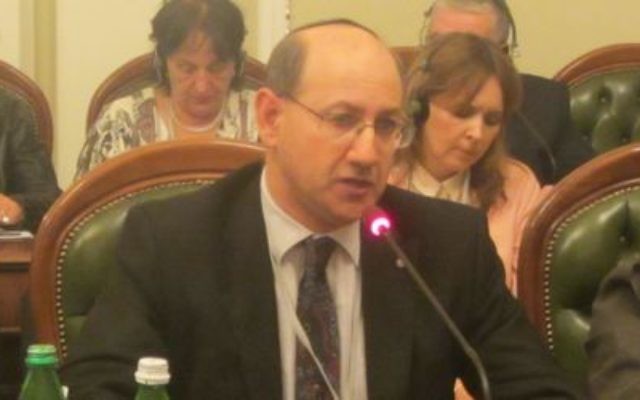 ANTI-Semitism in Australia rose sharply in the 12 months to September 30 this year, with 657 anti-Jewish incidents that met the Australian Human Rights Commission’s (AHRC’s) definition of “racist violence”, up by a fifth from the previous year, and the second highest tally on record.

However, physically violent anti-Semitism tapered off, with the number of serious physical attacks the lowest in eight years, according to Executive Council of Australian Jewry (ECAJ) findings.

The statistics, compiled by Jeremy Jones, Director of International & Community Affairs at the Australia/Israel & Jewish Affairs Council, were contained in the roof body’s annual report on anti-Semitism.

Jones stated that incidents of assault, arson attacks, face-to-face harassment and vandalism were 18 per cent above the average of 24 years, but at the lowest rate in eight years.

Threats – conveyed through telephone, mail, leaflets, posters or email – were 60 per cent above the previous average and at the second highest total recorded.

“The effect of incidents of anti-Semitism on the quality of life of individual members of the Australian Jewish community should never be minimised,” stated Jones. “The psychological impact on members of communities affected directly by harassment and intimidation can be serious, particularly as many of the threats have been directed against individual Jewish Australians in their homes, including survivors of the Nazi Holocaust.”

Taking a broad look at anti-Semitism in contemporary Australian society, ECAJ information officer Julie Nathan’s report stated that while stereotypes of Jews “remain part of the culture in Australia, these are not as deeply ingrained or hateful as in European and Middle Eastern ­cultures”.

“Anti-Semitism remains at the fringes of Australian politics and society, and … is not generally part of the mainstream discourse”.

Recalling the media buzz around revelations that former Melburnian Ben Zygier, found hanged in an Israeli high-security prison, had ties to Mossad, Nathan stated: “A tragedy involving a single individual was used in some media to impugn the loyalty to Australia of Australian Jews as a group.”

Social media has become a safe harbour for anti-Semitic comments, she said. For example, postings on a Facebook page promoting a Boycott, Divestment and Sanctions protest about the opening of an Israeli Max Brenner chocolate shop on the UNSW campus referred to “Jews and Jew lovers”, and claimed the figure of Holocaust deaths is exaggerated.

ECAJ succeeded in having offensive content taken off Facebook, when the social-media giant either removed or made inaccessible from Australia 35 of the 51 pages containing anti-Semitic material. The AHRC also convened a conciliation conference between the ECAJ and Facebook in January.

Broad public support by Australian MPs for the London Declaration on Combating Anti-Semitism was an encouraging sign, the report stated.

The statistics were compiled by Jeremy Jones.