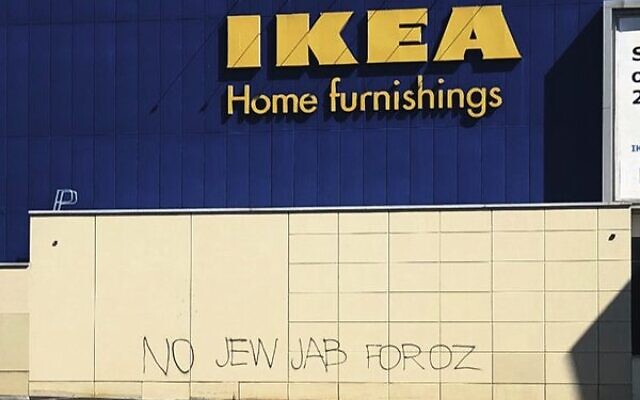 The graffiti at Ikea in Richmond last week.

ANTISEMITIC graffiti scrawled on the walls of an Ikea store in Richmond is among the latest incidents in a spate of abusive messages by some opponents of vaccinations and lockdowns.

In a week that witnessed violent demonstrations in Melbourne, the store’s walls were defaced with the hateful words, “NO JEW JAB FOR OZ”. Another scrawl repeated, “NO JEW JAB.”

A Jewish woman reported the graffiti to the Anti-Defamation Commission (ADC), police and Yarra Council. It has since been removed.

The ADC has also discovered antisemitic posts from local anti-vaccination and anti-lockdown groups on social media apps Telegram and Twitch. One post stated, “F****ING SCUMBAG JEWS MADE THIS DEATH POISON AND ARE FORCING IT ON YOU AND HIDING BEHIND POLICE. GO AUSTRALIA.”

Another exclaimed, “If your [sic] white and won’t submit to Jewish power then your [sic] a Nazi.”.

ADC chair Dvir Abramovich said his organisation has discovered that antisemitic posts are flourishing on many Australian anti-vaccine networks, including outright finger-pointing at Jews for creating and unleashing the virus.

The organisation believes that white supremacists have infiltrated these platforms.

“The pandemic has created a fertile ground for extremists, and it is becoming increasingly clear that there is a poisonous alliance between anti-vaxxers and antisemitic groups who are feeding off each other’s conspiracy theories and warped narratives,” said Abramovich.

“The neo-Nazis who first accused Jews of creating the ongoing pandemic are now using the growth of scepticism about vaccines, and the fact that many people are online during the lockdown, to spread their dangerous ideas to a wider audience.

“This domestic radicalisation is a cause for concern, and as this latest incident demonstrates, there is a coalition of actors that have locked arms to spread these lies,” he said.

Last week, The AJN reported a spate of stickers had appeared in Jewish areas of the city, equating the mandating of vaccinations with Nazi Germany. The stickers, which featured swastikas and read “NO JAB, NO JOB” had apparently been posted by a group calling itself The White Rose.

During the Holocaust, The White Rose was a student-led organisation that opposed the Third Reich. Its young leaders were executed in 1943.

In August, The AJN reported that slogans seen during anti-lockdown demonstrations in Melbourne also spread canards about Jews being involved in the 9/11 attacks on the US 20 years ago, themes that were previously seen largely online.