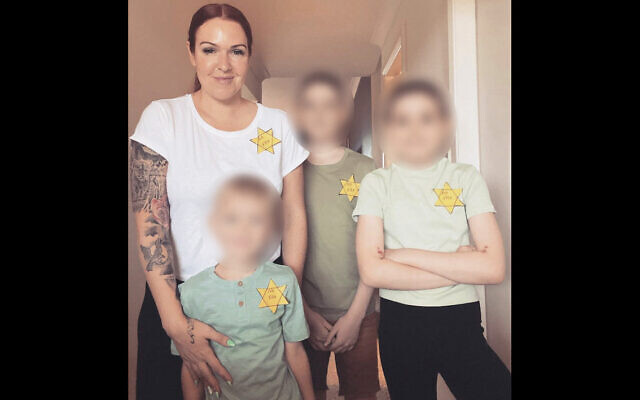 BLOGGER and well-known anti-vaxxer Sarah Mills has been slammed for her social media posts drawing a parallel between “segregated” Australians who refuse to get the jab with victims of the Holocaust.

Earlier this week, the NSW mother, who has over 100,000 followers across her social media accounts, posted a picture of her and her three young children wearing yellow Stars of David with “no vax” written in the centre of the badge. The caption, which outlines what Mills can no longer do as an unvaccinated person in the state, reads, “They say history always repeats itself and ladies and gentlemen, they are not wrong.”

In another post, Mills dressed herself in a striped top with a sticker numbered ‘385968’ pinned to her shirt, adding the caption, “Does anyone know where we get our full uniform? I’ve found the shirt but wasn’t sure if there’s anywhere you can get them as a set? Or are we just provided them upon arrival? Sending love to my future inmates.”

Defending the use of Holocaust symbolism, Mills told The AJN, “I was in no way comparing the deaths of millions of people to not being allowed into Kmart, but asking people to look at where that ‘them/us’ situation began.”

While she claimed that her “mother’s side is part Jewish”, and that she felt “sickened at the stories” she’d heard, she refused to back down or apologise, fighting off criticism by doubling down and commenting, “This star was how things began. Segregation. Exclusion.”

Commenting that while she is entitled to her opinions about the actions of state governments in response to the pandemic, he said, “It is beyond outrageous to compare them to the monstrous laws enacted by Hitler’s Third Reich or to claim that the vaccination policies are in any way similar to the Final Solution.”

Mills previously shared a post which suggested people who support government mandates would have turned Anne Frank over to the Nazis.