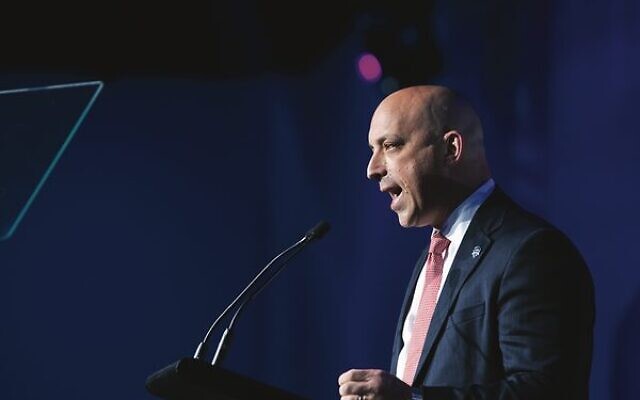 ANTI-DEFAMATION League CEO Jonathan Greenblatt lamented in his keynote speech at JNF NSW’s event on September 6 how the anti-Zionist movement, and “its campaign of hate” is “having no bigger foothold than at our college campuses”, in the US, here in Australia, and around the world.

“I learned about what happened at the University of Melbourne, where the student council passed a BDS resolution, and how [Jewish] students say they’re feeling increasingly unwelcome on campus,” Greenblatt said.

“And earlier today, when I visited Moriah College, I heard the anxiety in the voices of the kids … looking ahead, they’re worried, knowing that anti-Zionism [at campuses] is a growing threat.

“Anti-Zionism is an ideology of animus, based purely on negating the rights of a single people, the Jewish people, to self-determination … and it must be stopped in its tracks.”

Greenblatt said whether extremist views and antisemitic incidents are emerging from the extreme left or right, there’s never been a more important time for Jews to, “call it out, to speak up”, to educate others with “dispassionate facts, not with hysterical rhetoric”, and to “do our utmost to not just preserve the gift of liberal democracy, but to repair and strengthen it” through participation.

“Enabling children to spend time outdoors in new sheltered spaces is a must in the western Negev, and this is being achieved thanks to you,” she said.

Other highlights included a speech from Kibbutz Nir Am resident Elite Paz about daily life as a parent near the Gaza border, and a performance by Sydney-born Broadway star Alexis Fishman, and the Moriah College choir.