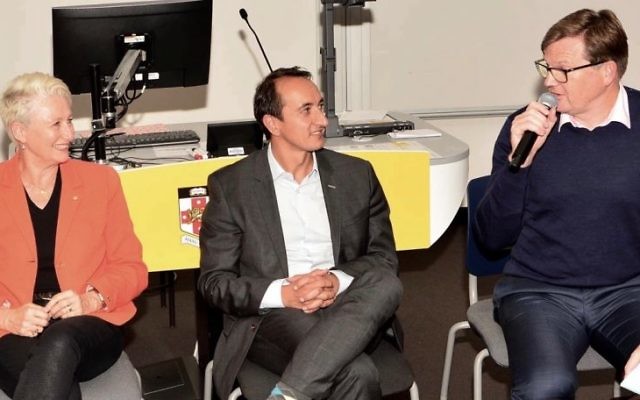 ONLY days into the federal election campaign, the race for the seat of Wentworth has been sullied by an offensive email targeting Jewish MP Dr Kerryn Phelps.

The email, which was sent to a business database and also reached recipients in Melbourne, comes after a similar offensive message, also targeting Phelps, circulated during last October’s by-election.

It holds the Jewish community responsible for the recent measles outbreak, taking particular aim at Phelps, a practising GP.

“The Jews refuse to vaccine (sic) themselves on anything, and they are spreading measles and many other diseases,” it reads.

“Kerryn Phelps, a doctor who receive Federal funndings (sic), refuse vaccination for her fellow jew, had brought in thousands of sick kids from refugee camps -full of diseases- into Australia, and plans to spread the plague to every corner of Australia so she can make a fortune treating patients.”

The email instructs voters to vote for Liberal candidate Dave Sharma, who it says “will make sure all Jewish community in Wentworth got vaccinated”, adding “Next time seeing Kerryn Phelps doing campaign please stay away … A gay woman not vaccinated plus a herd of Jews or gays not vaccinated will not be a good news for your immune system.”

Both Phelps and Sharma, who along with Labor candidate Tim Murray faced off on Sunday night at an election panel hosted by the Australasian Union of Jewish Students and The AJN, were quick to condemn the email.

“This is the kind of hate speech that we must see eliminated from our national discourse,” Phelps told The AJN. “Antisemitic content like this leads to other kinds of antisemitic behaviour.”

Phelps said both her electoral office and her medical clinic had received a large number of distressed calls about the email. As with last October’s offensive email, she said it had been referred to the police.

“We cannot allow this to go un-investigated and unpunished,” she said.

“This person or group of people need to be tracked down and stopped from sending around these kinds of emails.”

Sharma told The AJN, “These bigoted, racist and divisive emails have no place in our democracy. Especially in a seat such as Wentworth, with its significant Jewish population, I am all too aware of how such hateful and intolerant speech can do harm, and have zero tolerance for it.

“I have referred such emails to the AFP for appropriate investigation and action.”