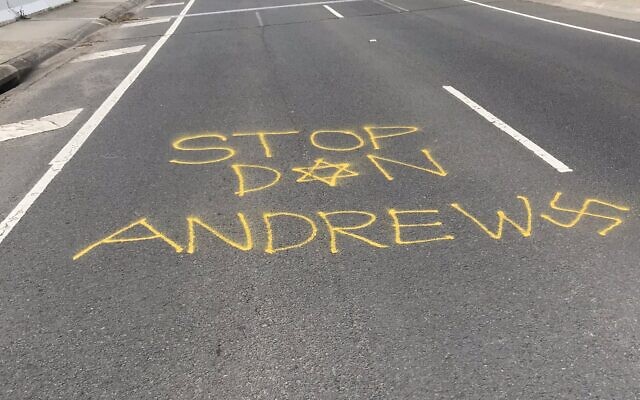 The vandalism reads “Stop Dan Andrews” with a Magen David replacing the “a” in Dan, and a swastika instead of the “s” in Andrews.

It was spotted by Australian Financial Review columnist James Thomson, who tweeted, “Disgusted to see this on a road in Donvale in Melbourne’s east this morning.

“Appreciate feelings are running high about the lockdown, but this vile garbage is plain wrong.”

The sentiment was echoed by Executive Council of Australian Jewry co-CEO Alex Ryvchin, who lamented, “This is absolutely appalling. When segments of society descend into conspiratorial thinking the evil of antisemitism always surfaces.”

The Australia/Israel & Jewish Affairs Council said it was a “sad reminder of how the COVID-19 pandemic has unleashed dangerous antisemitism including conspiracy theories which must be condemned.”

“Using this evil symbol to attack Premier Andrews is an insult to the memory of victims murdered at the hands of the Nazis and to those brave Australian soldiers who sacrificed their lives to defeat Hitler’s Third Reich,” he said.

“We trust that those who carried out this outrageous act are identified and are brought to justice.”