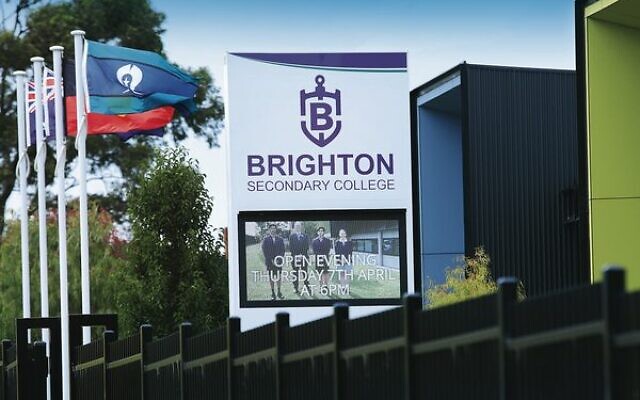 FORMER students at Brighton Secondary College (BSC) have told the Federal Court of Australia that antisemitic bullying, swastika graffiti and violent threats were part of Jewish students’ daily lives at the school, and teachers did not intervene.

The college – and the Victorian government – are being sued by five former students. Brothers Joel and Matt Kaplan, Liam Arnold-Levy, Guy Cohen and Zack Snelling allege that between 2013 and 2020 the school tolerated an antisemitic culture that deprived them of their right to be educated in safety.

In court on Tuesday, former BSC student Epaminondas Notis Korkoneas, who is not Jewish, testified before Justice Debra Mortimer that his classmate Joel Kaplan was subjected to persistent bullying and was regularly confronted by students at lunchtimes, recesses and in class. There were frequent incidents in which Kaplan had been “cornered” and subjected to “physical” abuse.

Examined by barrister Adam Butt, appearing for the complainants, Korkoneas said Kaplan had ashes and coins thrown at him and was taunted by cries of “Jew”.

Students threatened to steal Kaplan’s yarmulke or throw it around, he said, and his classmate was tormented with Holocaust jokes about burning Jews and about ovens. Teachers were often close by but generally failed to enforce any discipline, said Korkoneas. “They didn’t do much about it,” he said, claiming nobody was punished for this conduct.

Korkoneas said more than 100 swastikas had been daubed on lockers, bathrooms, fences and books. Although the sight of the swastikas did not impact on him personally, he said he knew it “had a lot of meaning” for the Jewish students and was “very bad”.

However, he saw no student get into trouble over the swastikas, he was not aware of any school investigations into the daubings and did not recall any teacher warning students they could be in trouble.

After a 2019 school assembly at which principal Richard Minack referred to his father, who had served in the Nazi German army, as a “good man”, antisemitic behaviour at the school increased, said Korkoneas.

When the Holocaust-themed graphic novel Maus was taught in year 9, students did not appear to understand its message and made anti-Jewish jokes about it, he said.

Kaplan gave evidence he was regularly confronted with antisemitism and bullying, and when he reported incidents to staff, was told to confine his complaint to the reported incident and not make other comments about antisemitism he had experienced. “The reporting process was broken and it was a waste of my time to report anything,” he stated.

Adding to the pressure on him, Kaplan had decided not to relate all the incidents to his mother because of her ill health.

Chris Young, QC, appearing for the State of Victoria and BSC staff, denied the accusations and said each complainant’s allegations would be dealt with, and the principal and staff’s steps to punish wrongdoing would be presented.

Cross-examined by Young, Kaplan was urged to recall that teachers had told students the daubing of swastikas had to stop, but said he did not recall hearing that. He rejected Young’s proposition there was evidence that all reported incidents were followed up by staff.

Kaplan said at one point he was sent home after saying to a teacher he was being treated like the Jews in the Maus novel.

Earlier, Butt stated, “We’re talking here about a normalised culture of antisemitism,” and BSC’s failure to protect its students violated the Religious Discrimination Act and the UN Convention on the Rights of the Child.

Arnold-Levy testified a knife had been held to his throat and students received online death threats. There had been no follow-up to students’ complaints. “There was no urgency, no concern, nothing. It made me feel a million times worse.”

Witness Esther Meltzer, who was a wellbeing officer at Leibler Yavneh College, counselling Arnold-Levy when he arrived there after leaving BSC, described him as “very anxious”, adding, “It was a nightmare for him.”