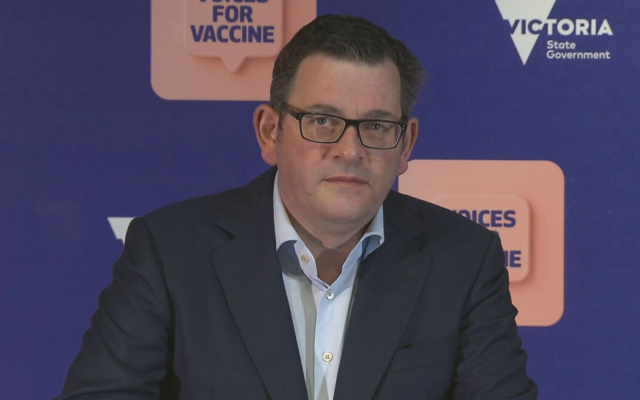 Daniel Andrews slammed the "appalling commentary" towards the Jewish community.

VICTORIAN Premier Daniel Andrews has slammed members of the public who have lashed out at the Jewish community in light of last week’s engagement party, calling the barrage of antisemitism “unacceptable and evil”.

The Premier called out the commentary at Tuesday’s COVID press conferences, labelling the targeting of the Jewish community “appalling”.

“We have a zero tolerance approach to that in our state,” he said, adding that the actions of those at the engagement party “was not a reflection on the Jewish community more broadly, it was not an act of faith or culture”.

It was just a “stupid function … an illegal function”.

“We have a proud Jewish community,” he added, noting, “So many Jewish community leaders are stepping up and have condemned what occurred. I thank them for their leadership.”

While the families involved endure death threats, members of the Jewish community who were not involved have also faced antisemitic abuse. One local institution received a voice message saying, “all you Jewish [sic] are pieces of s**t.”

A local shule also received a voice message, saying, “It’s bad enough that I can’t stand Jews but now this makes it even worse for you guys.”

A comment on the Big Footy Forum page said, “boy what a shame Germany didn’t build more ovens back in the day,” while a comment on a Facebook post said, “We have another job for hitler.”

A post shared by The Australian Jewish News (@jewishnews_au)

In a joint statement, Victorian Opposition Leader Michael O’Brien, Caulfield MP David Southwick and Shadow Minister for Multicultural Affairs Neil Angus, said, “There is no excuse to use vile hateful language or blindly target innocent businesses or members of the Jewish community.

“The Jewish community have always been law abiding citizens that have made such a significant contribution to our state and like all multicultural and religious groups, should not be targeted for the actions of a few,” they wrote.

A Royal Melbourne Hospital employee also joined the sea of hatred on Facebook, commenting on a post that the people who held the party should be put “in a gas chamber”.

In a statement, the Royal Melbourne Hospital called it an “abhorrent and disgraceful antisemitic comment”, and said it did not reflect the hospital’s values.

“We do not tolerate racial or religious hatred, contempt or ridicule,” the statement said, adding, “The staff member is no longer an employee of the hospital and we apologise for the hurt and anger this has caused.

“We stand with and support our Jewish staff members, patients and community.”

Daniel Aghion, Jewish Community Council of Victoria president, stated, “The JCCV abhors the vile antisemitic attacks that have been perpetrated upon our community in the last few days. As the Premier correctly said, there is never ever a place in Victoria for antisemitic behaviour or language. It is simply evil.

“We thank the Premier for his strong statement and support of our entire community,” he added. “We are grateful for his words, and embrace them.”

Anti-Defamation Commission chairman Dvir Abramovich condemned “the pointing of fingers at the Jewish community for this extended lockdown”, adding that the “engagement party has become a vehicle for malicious stereotyping and generalising, demonisation and calls for violence which are frightening in their intensity”.

“This erodes the unity our state needs now more than ever,” he added.