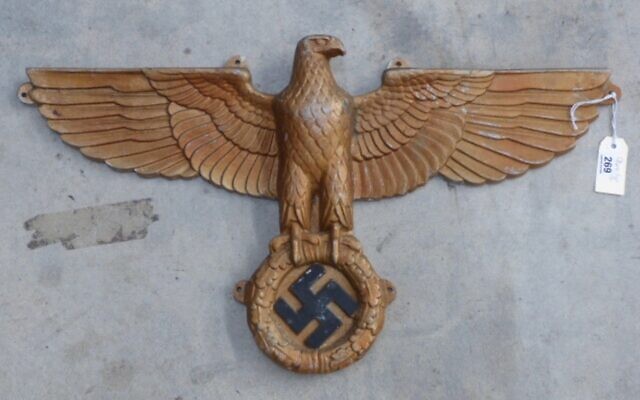 The item that was offered for auction this week.

A TASMANIAN auctioneer has this week apologised to “anybody who has been affected” by the sale of a piece of Nazi memorabilia, despite proceeding with the auction, which has been described as “morally repugnant”.

Armitage Auctions, which has come under fire in the past for selling other Nazi items, defended the sale of a German eagle crest featuring a swastika, arguing “there are many forms of memorabilia relating to horrific periods in history”, and that “people are interested in artefacts associated with these events”.

“We can understand completely that the sight of items relating to the atrocities that occurred in the war could be upsetting, and to those affected we are sorry,” auctioneer and director Neil O’Brien told The AJN on Tuesday.

Stating, “While we obviously condemn what happened in the war along with similar atrocities throughout history,” O’Brien said, “The majority of the people we have dealt with who collect these items are collectors of all war memorabilia not just German, and collect on a historical basis, not with the intention of spreading hate and antisemitism.”

Noting that the items are legal to sell, O’Brien added, “We wish that we did not have to make a decision on morally what we should or should not be selling.”

Executive Council of Australian Jewry co-CEO Peter Wertheim told The AJN auctions such as these normalised the “brutal horrors of Nazi rule” and were “especially problematical at a time of rising fear and uncertainty”.

“Items of Nazi memorabilia are often used to promote or glorify racism, bigotry, hatred and even violence,” Wertheim said.

“Many auction houses refuse to engage in this morally repugnant trade. They put to shame those which continue to do so.”

O’Brien hit back, saying, “Along with almost all general auction houses around the country, we have sold all types of war memorabilia including German related items for over 30 years.

“The majority of the items that we have sold recently are from collectors who have had the items for a long time and are getting older and need the money, or refining their collections.”

Repeating his call for state governments to ban the sale of Nazi memorabilia, Anti-Defamation Commission chairman Dvir Abramovich lamented, “I’m sure that Hitler would be glad to know in today’s Australia the blood-stained instruments of his regime’s monstrous crimes are proudly offered for sale and are available for neo-Nazis and Third Reich worshippers who are nourished by and revel in this stuff.”