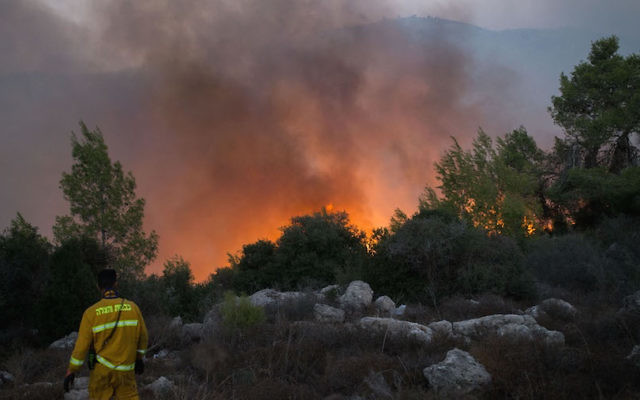 A firefigher at the scene of a bushfire which started on November 25 near Nataf, outside of Jerusalem. Photo: Yonatan Sindel/Flash90.

AUSTRALIAN Jewry is being urged to dig deep to help with the recovery and rebuilding effort in Israel following the devastating fires that tore through the country, destroying and damaging thousands of homes.

But members of the community are also being warned not to fall victim to bogus fundraisers purporting to be raising vital funds for ZAKA, Israel’s primary rescue and recovery volunteer organisation.

“It has come to ZAKA’s attention that there are currently two people fundraising in the Australian Jewish community claiming that they are raising money for the fire-fighting effort in Israel by ZAKA Search and Rescue,” said Yossi Fraenkel, the head of ZAKA’s Australia region.

“While it is true that ZAKA volunteers were involved in this effort, the people asking for money are not representing ZAKA Search and Rescue and the monies are not going to that charitable volunteer organisation.”

Fraenkel alleged the pair is using “aggressive methods” to raise money, adding, “We’re sorry for any inconvenience caused by these individuals.”

Last week’s fires, some started deliberately apparently as acts of terror, led to 75,000 people being evacuated, with 400 homes completely destroyed and 2000 damaged.

JNF’s Israel Fires Emergency Appeal is raising funds for intensive reforestation of areas destroyed by the fires, critically needed fire-fighting trucks and equipment, and communities and families, helping them to restore their lives.

JNF CEO Dan Springer said the response so far from the Australian community has been “truly gratifying”.

“If you have not yet done so, please support the effort to save Israel’s beautiful forests and the many communities that have been affected by this tragedy,” he said.

Haifa’s Ahuzat Yeladim residential school for children from troubled backgrounds, which is funded by WIZO Australia, was badly damaged by the fire.

Calling on all members to rally for an emergency appeal, WIZO Australia president Paulette Cherny said, “We, together with all Israeli citizens, pray for rain to douse the flames and hope that our beautiful country will be once again restored.”

Meanwhile, Magen David Adom (MDA) has activated its emergency protocols and is operating at the highest level of alert.

NSW Friends of Magen David Adom president Roland Nagel said the community should be reassured that MDA’s vehicles and lifesaving equipment, and its highly trained paramedics, medics and volunteers, will “stop at nothing to respond to such emergencies and help save lives”.

“In conjunction with this extraordinary effort, there have been significant demands on MDA’s resources including medical supplies and emergency equipment,” he said.

Responding to the fires, The Joint Distribution Committee mobilised its Israel emergency response system and wide-ranging network of partners to assess needs and ensure that the most vulnerable Israelis aided by The Joint are safe and cared for.

“Jews in the diaspora often feel helpless at times like these but The Joint offers us an avenue to make a real difference to real people in real time and I hope people will give generously,” said Eva Fischl, president of The Joint in Australia.