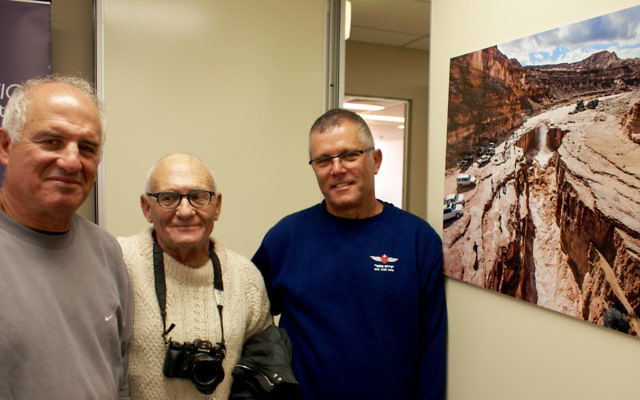 ISRAELIS are credited for making the desert bloom, but the 3500 hardy residents of the Arava region are particularly good at it.

Despite living in the hottest, driest and most isolated patch of Israel that receives only 30mm of rain per year, their farmers use cutting-edge technology and plenty of passion to produce 60 per cent of Israel’s vegetable exports.

Yet this is little known, even within Israel.

Thanks to the latest chapter of the Partnership2Gether Arava Australia Program – facilitated by the Zionist Federation and the Jewish Agency – a delegation of three talented Arava-based photographers arrived in Sydney last month to offer firsthand insights about the Arava through their craft.

Israel Prize-winning photojournalist Alex Levac told The AJN if you do photography well, “you capture reality the way you see it, in one frame”.

“A camera is like a passport to everything and it opens lots of doors,” he said.

“People often go between Eilat and Tel Aviv but they don’t stop [in the Arava], so they don’t know people live here and that every aspect of community life is as full as in the north.

“This is my new role – to document life in the Arava,” Levac said.

“We live in a bubble in a supportive community where everyone knows everyone; we don’t need to lock our cars or homes; we tell our children to go outside and explore,” Livni said.

“And the way we do farming is unique. We have the Arava International Centre for Agricultural Training, we take lots of varieties of crops and see how they can work well in the desert.”

The delegation’s four-day stay in Sydney saw them present their work at a welcoming reception in Darlinghurst and at a Shabbaton at Central Synagogue.

They also headed to the harbour to run a JNF Vivid Festival photography workshop.

Upon their return, they will exhibit photos taken during their Australian trip.

Director of the Arava Australia partnership Orit Cohen said, “We host hundreds of Australians in our homes through the Partnership2Gether program every year.

“I think the Arava showcases to the world that a desert can be anything that you can dream of.”