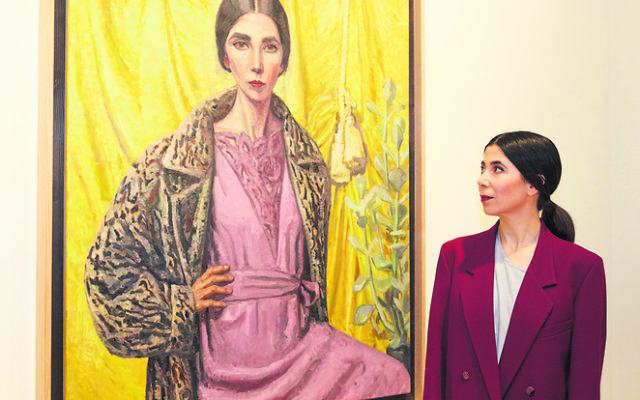 Yvette Coppersmith with her Archibald Prize-winning Self-portrait, after George Lambert.

ONE of the first people to congratulate artist Yvette Coppersmith on winning the $100,000 Archibald Prize for her self-portrait last week was New Zealand Prime Minister Jacinda Arden, who had knocked back the artist’s request to sit for a portrait.

After the refusal, Coppersmith decided on a self-portrait with a twist, styled after one of her favourite Australian artists, George Lambert, who lived from 1873 to 1930.

The work, titled Self-portrait, after George Lambert, was the unanimous choice of the judges from the Art Gallery of NSW in Sydney.

Although the announcement was made last Friday at noon, Coppersmith was told of her win a few hours earlier.

“It was quite a shock to receive that call telling me I had won the Archibald Prize,” the Caulfield artist told The AJN.

“They want to make sure that you are at the announcement, but it also gave me time to reflect on the win before meeting the media and that everything in your life is about to change.

“So I just went out for a walk – I didn’t even call my mum with the news.”

Coppersmith has been a finalist five times with portraits of former president of the Australian Human Rights Commission Gillian Triggs (2017), broadcaster John Safran (2009) and actor Paul Capsis (2008), and a self-portrait in 2016.

Coppersmith is only the 10th female artist to win the Archibald Prize, joining another Jewish artist, Judy Cassab, among the winners.

After the announcement, Sky News interviewed Coppersmith and told her they had someone on the phone who wanted to speak to her.

“I thought it might be my first art teacher, but the person said, ‘Hi, its Jacinda Arden.'”

The NZ PM said she thought it was a great painting and that it had worked out for the best.

“The reason I wanted to paint her was to inspire the younger generation of leaders in our country, but even without painting her portrait I could still reference her and create a conversation,” she said.

“Jacinda was really happy for me and that she had inspired someone to do their best work.”

The works by the 58 finalists are on display at the Art Gallery of NSW until September 9 and will later tour regional galleries in Victoria and NSW.

Coppersmith has stayed in Sydney for an exhibition at Artbank in Waterloo which includes her paintings. “There have been lots of events associated with the Archibald Prize this week, and while I’m away my family held a l’chaim to celebrate,” she said.