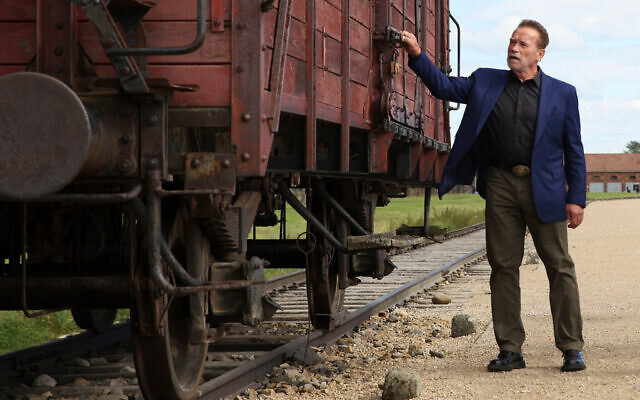 OSWIECIM, Poland (AP) — Film icon Arnold Schwarzenegger visited the site of the Auschwitz Nazi death camp on Wednesday, meeting a Holocaust survivor and the son of Holocaust survivors and saying it is time to “terminate” hatred.

The Terminator actor and former California governor viewed the barracks, watchtowers and remains of gas chambers that endure as evidence of the German extermination of Jews and others during World War II.

He also met with a woman who as a 3-year-old child was subjected to experiments by the notorious Nazi doctor Josef Mengele.

“This is a story that has to stay alive, this is a story that we have to tell over and over again,” he said after his visit to the site of the death camp, speaking in a former synagogue that now is home to the Auschwitz Jewish Center Foundation.

He stood alongside Simon Bergson, the foundation’s chairman, who was born after the war to Auschwitz survivors, and mentioned his own family history. 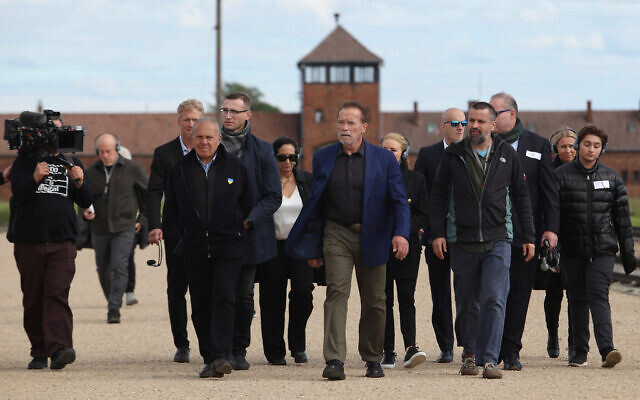 “I was the son of a man who fought in the Nazi war and was a soldier,” the 75-year-old Schwarzenegger said in Oswiecim, the town where the Auschwitz site is located.

He said he and Bergson, who are close in age, were united in their work.

“Let’s fight prejudice together and let’s just terminate it once and for all,” Schwarzenegger said.

Bergson added: “Arnold and I are living proof that within one generation hatred can be shifted entirely. Governor, thank you for joining us here today.”

His visit to the site in southern Poland, which was under German occupation during WWII, was his first and came as part of his work with the Auschwitz Jewish Center Foundation, whose mission is to fight hatred through education. 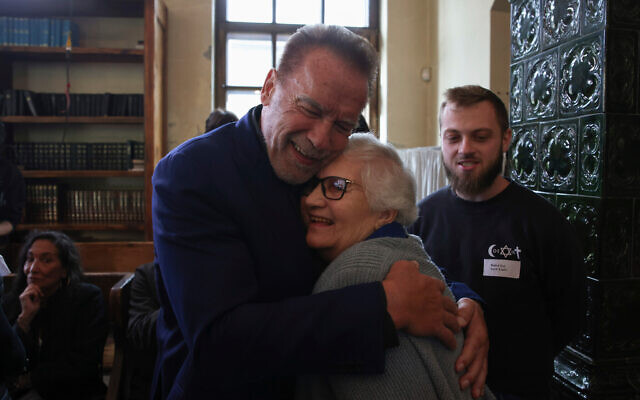 He received the foundation’s inaugural Fighting Hatred award in June for his anti-hatred stance on social media. He said he couldn’t attend in person then because he was filming a new action series in Canada and was in a “COVID bubble.”

He vowed that Wednesday’s visit would not be his last.

“I’ll be back,” he said, using a famous line from “The Terminator.”

Schwarzenegger, who is originally from Austria, has spoken openly in the past about his father, Gustav Schwarzenegger, being a Nazi soldier during the war.

He told Russians in a video posted on social media in March that they were being lied to about the war in Ukraine and accused President Vladimir Putin of sacrificing Russian soldiers to his own ambitions.

In that video he brought up painful memories about how his own father was lied to as he fought, and how he returned to Austria a broken man, physically and emotionally, after being wounded at Leningrad.

Historians estimate that around 1.1 million people were killed at Auschwitz during the war. Around 1 million of them were Jews. Some 75,000 Poles were killed there, as well as Roma, Russian prisoners of war and others.