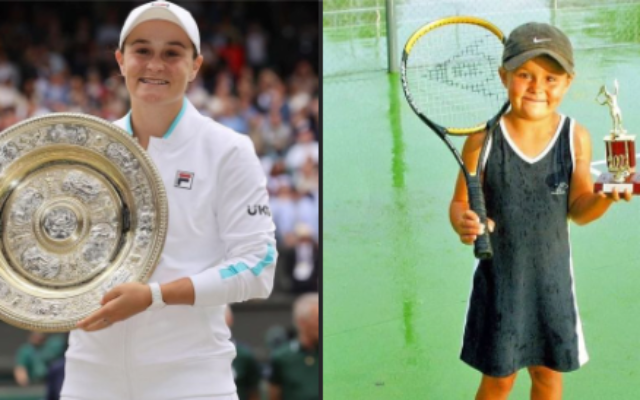 Now and then: Ash Barty.

“I’ve had ups and downs, and everything in between, and I wouldn’t change one day or one moment, or one route we’ve taken on my path.” (Ash Barty, on the eve of her Wimbledon Championship)

Not more than 30 minutes after waking up last Sunday, I found myself disconsolate. Evidently, a failure to properly program the Foxtel remote meant that I would be unable to watch every moment of Ash Barty’s Wimbledon Final match in real time or to experience the unpredictable, roller coaster of emotion that often accompanies these bitterly contested, and often thrilling, sporting events.

Rebounding, I flipped up my laptop and like millions of other Australians, rejoiced when learning that the world’s number 1, Ash Barty, the pride of Ipswich, had realised her goal of winning the women’s singles championship at Wimbledon.  Though having suffered a serious injury to her hip during her second-round match at the French Open early in June, Ash fought on, doubly determined and stubbornly resilient, overcoming doubt, adversity and countless hours of rehabilitation. Along the way, Ash planted the seeds of her success and returned to championship form.  A true Aussie battler!

Ash would be required to test that hip every day during those two gruelling weeks of competition and when it mattered most, displayed uncommon skill, poise, tenacity and strength on the court.  Following her victory, Ash acquitted herself with maturity, graciousness, gratitude and exceptional humility off the court as well.

After the close of her final’s match, Ash, like all great champions, began by acknowledging the great effort made by her final’s opponent, Karolina Pliskova.  Having suffered disappointing losses many times herself, Ash sincerely acknowledged her opponent’s pain in defeat, showing character and empathy.  Moments later, the ever-humble champion made a point of attributing her success less to her own talent and more to the effort and sacrifice made by her support team and her family watching back home.

Throughout, Ash exemplified the attributes of humility and respect whenever referring to her mentor, Evonne Goolagong Cawley who had won the same championship 50 years earlier.  Her choice to wear a scalloped tennis outfit, closely resembling that worn by Cawley, was a symbolic recognition of their close relationship, the indebtedness she feels towards the former Australian champ, as well as her noticeable pride in her indigenous heritage.

As an Australian, it is a source of naches (pride) that Ash Barty’s name is now inscribed on the Venus Rosewater Dish awarded to each year’s women’s champion.  Her play was outstanding, and her victory, deserving.  It will likely be the climax of an already exceptional tennis career. But I would venture to say that Ash is responsible for an even more indelible lesson, one consciously cultivated and left behind for every young child and every future champion: that with resiliency, hard work, sacrifice, dedication and the willingness to learn from others; by knowing who you are and where you come from, you can achieve your dreams.

As a Jew, Ash’s extraordinary resilience is reminiscent of the story of the Jews.  An indefatigable people, our strength derives from a history that tells of crisis and regeneration, despair and hope, time and time again. Egypt led to Sinai and eventually to Abraham’s Promised Land.  The destruction of Jerusalem and the loss of Jewish sovereignty in Eretz Yisrael contributed to the creation of a new, enduring network of Jewish institutions, the flowering of Torah study and the strengthening of the Jewish home. And the Shoah, though horrific in every respect, can now be seen, with a limited perspective, as but the darkest hour of the night, one that would precede the advent of the State of Israel, the dawning of our redemption.

For all of us, the resurgence of COVID-19 infections in the last several weeks, particularly in Sydney, looms as a formidable challenge to our personal resiliency and that of our families, our communities and our nation. Once more our physical and mental health is threatened, our jobs insecure, our movement restricted and our children kept from their schools.  For many, the lockdown places a heavy burden on mind, heart and spirit for it would seem we are further than we had thought from our hope of returning to normal.

So, thank you Ash for reminding us what normal looks like, of how much can be achieved even when the circumstances are less than optimal, when resiliency is demanded, and the challenges can seem at times to be more than we can bear.

Rabbi Gary Robuck is an educator with Gesher Educational Services living in Sydney.