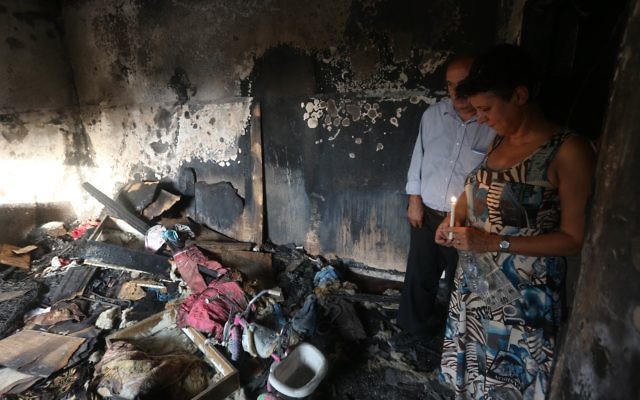 THOSE responsible for last Friday’s arson attack in the West Bank that claimed the life of an 18-month old Palestinian boy “have repudiated the sacred values of Judaism”, the Executive Council of Australian Jewry (ECAJ) said this week.

Ali Saad Dawabsheh died in the attack while his four-year-old brother and parents were evacuated to an Israeli hospital suffering moderate to serious burns.

The incident has been widely condemned within Israel and in the Diaspora, with Israeli Prime Minister Benjamin Netanyahu labelling it “a heinous, horrific act … which is a terrorist attack in every respect”.

Locally, in a joint statement, ECAJ president Robert Goot and executive director Peter Wertheim said they were “saddened, appalled and outraged by the heinous crime”.

“This was an act of terror which has left an infant boy dead and shattered the lives of a young family. Nothing can excuse or mitigate the outrageous criminality of this incident,” they said.

“The perpetrators have brought shame upon themselves and have repudiated the sacred values of Judaism, which uphold the sanctity of human life, especially the life of a child, above all other values.

“We have every confidence that all means available to the Israeli criminal justice system and the Israel Defence Forces will be swiftly mobilised to bring the killers to justice.”

The Australia/Israel & Jewish Affairs Council (AIJAC) said it condemned the attack “in the strongest terms”.

“Terrorism is inherently vile and a moral outrage, and must be uprooted regardless of who perpetrates it,” AIJAC national chairman Mark Leibler and executive director Colin Rubenstein said.

“According to reports, Israeli authorities have launched a major manhunt to bring to justice not only those directly responsible for this attack, but those dangerous extremists who associate and conspire with them.

“We join Israel’s Prime Minister in his call for the Israeli security agencies to swiftly carry out their investigative work towards speedily bringing those responsible to justice for this heinous act of terrorism.”

Zionist Federation of Australia (ZFA) Public Affairs Committee chairman Ron Weiser said the organisation joined leaders “from across the Israeli political spectrum” in expressing its revulsion over the “murderous criminal violence inflicted by cowards” against innocents.

“The firebombing of a home in Duma was a craven act of political terrorism,” he said.

“We have every confidence that Israeli law enforcement authorities will identify and punish the murderous thugs who committed this terrible crime.”

“There have been hundreds of attacks targeting Palestinians and their property, as well as Christian and Muslim holy sites, by Jewish extremists. And Israeli law enforcement authorities have yet to properly confront this threat,” he said.