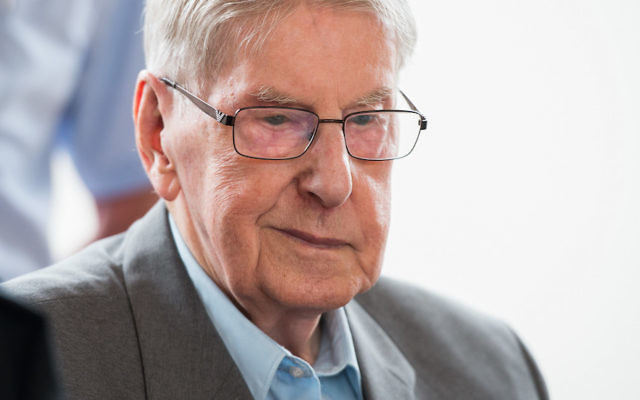 REINHOLD Hanning, a 94-year-old former guard at Auschwitz-Birkenau is appealing his conviction on 170 000 counts of accessory to murder. A statement released by the Detmold state court said that Hanning’s attorneys had filed appeals following the June 17 verdict.

During the trial of another Auschwitz guard, the court heard Hanning had contributed to the building of the ‘death machinery’ in the camp, where approximately 1.1 million people were murdered. The court also heard that Hanning was promoted twice between 1942 and 1944.

In a 22-page report declaration, Hanning acknowledged that he knew what was happening in the camp. “I want to say that it disturbs me deeply that I was part of such a criminal organisation,” he told the court, “I am ashamed that I saw injustice and never did anything about it and I apologise for my actions. I am very, very sorry.”

The declaration also states that Hanning joined the SS willingly in 1940, aged 18. After being wounded in battle, Hanning was not allowed to return to the frontline, and was instead sent to Auschwitz at age 20.

“People were shot, gassed and burned. I could see how corpses were taken back and forth or moved out. I could smell the burning bodies; I knew corpses were being burned,” the statement read. The statement did not confirm Hanning’s involvement in any killings in the camp.

Prosecutors say that part of Hanning’s job was to meet Jewish prisoners upon arrival at the camp, and that he may have sent some of them to the gas chambers.

This is the first time that Hanning has spoken openly about his time at Auschwitz. Present in court during the verdict was Auschwitz survivor and co-plaintiff Leon Schwarzbaum, aged 95, who said that Hanning’s apology was simply “not enough”.

“I lost 35 family members, how can you apologise for that?” Schwarzbaum was quoted by AP news agency as saying. “I am not angry, I do not want him to go to prison but he should say more for the sake of the young generation today because the historical truth is important.”

The prosecution had requested that Hanning serve six years in prison. His lawyers pushed for an acquittal, arguing that there was no proof he directly participated in a specific act during his time as guard. Hanning was sentenced to five years in prison, despite the experts’ predictions that he was unlikely to serve time due to his advanced age.

“The court in its ruling argued that Mr. Hanning in his prominent role as a guard made a considerable contribution by making the murders that occurred many thousands of times even possible,” court spokeswoman Anneli Pauline Neumann said.

Ronald S. Lauder, president of the World Jewish Congress, praised the court for their handling of the Hanning case: “Mr. Hanning got a fair trial, and today’s verdict is very clear: He was complicit in mass murder. He was part of a merciless killing machine. Without the active participation of people like him, Auschwitz wouldn’t have been possible.”

Had Hanning’s trial been conducted even five years ago, conviction would not have been possible. Until 2011, German prosecutors were required to submit evidence that defendants had specific and direct involvement in the killings.

Hanning’s case was one of 30 similar cases that Germany’s Central Office of the Judicial Authorities for the Investigation of National Socialist Crimes has transferred to prosecutors across the country since 2011.

But according to the agency’s chief prosecutor, the trials are a difficult process. Of the 30 cases brought to trial, 24 had to be halted, either because the accused passed away or were deemed unfit to stand trial.

Hanning is only the third defendant to be convicted for Holocaust atrocities by a German court. In 2009, 90-year old former Treblinka guard John Demjanjuk was given a five year sentence after being formally charged with 27,900 counts of being an accessory to murder.

In 2013, Oskar Groening was convicted by of being an accessory to the murder of 300,000 Jews and given was given a four year sentence. His case is currently awaiting review before the Supreme Court.

But chief prosecutor Jens Rommel says that their work is far from over. “We continue to look for more. As long as there is a tiny chance to find people alive, we continue to investigate,” he said.