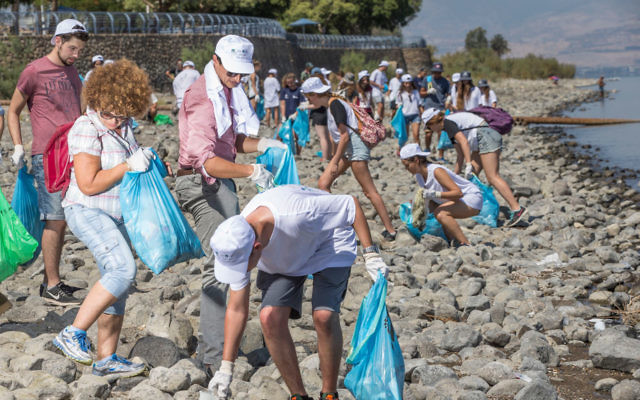 Australians volunteering on Clean Up Israel Day in the Kinneret.

LOCALS said they were the best-behaved tourists they ever saw. When 120 Australians rolled up to the Kinneret this week, they didn’t only avoid leaving the usual trail of trash – they spent hours picking up rubbish that other visitors had left.

The Aussies were helping to import a much-loved Australian institution, Clean Up Australia Day, to Israel. The annual Australian occasion inspired Clean Up the World season, and they were kicking off events in Israel.

Under the hot summer sun, they spent hours picking up rubbish and – they hoped – setting an example for Israelis. Aidan Nussbaum, a 19-year-old from Sydney, said that by bringing the characteristically Australian concern for the environment to Israel and giving up time for a major clean-up, they can be “role models”.

Claiming the high level of rubbish “always frustrated us”, when he and friends visited the Kinneret, he said: “We want to show Israelis that if you treat the land like rubbish it won’t be beautiful.”

Nussbaum is on a gap year in Israel – the Israel By Choice program in his case – as were most of the volunteer garbage gatherers. Others were staff from the Australian Embassy in Tel Aviv, led by ambassador Dave Sharma, who initiated the event.

After stopping for a simple lunch, looking out on the Sea of Galilee, Sharma said that he hopes the Aussie effort will cause locals to “take a bit more pride in the piece of prime real estate that is here”.

Jessie Horovitz, a 19-year-old from Melbourne who is on Habonim Dror’s gap year program, was thinking along similar lines. “We learned today that the environment isn’t a major focus in Israel, whereas in Australia it’s a prime focus,” she said. “So it’s really important to bring this kind of thing to Israel.”

The volunteers quickly discovered that a clean-up in Israel can be more challenging than in Australia, because of people’s tendency to drop tiny items in large quantities. The Israeli habit of snacking on sunflower seeds and discarding the shells meant lots of hard clean-up work.

Yael Sella of the Kinneret Authority lauded the volunteers and stated: “This is the first time that we’ve had a clean-up team from a foreign country.”

Alec Masel, a 19-year-old Habonim-nik from Melbourne, said that for him, it felt like Zionism in action. “It sometimes feels in this program like we don’t get out to the community and give back enough, but I feel now we are doing so and that this is a most Zionist act.”