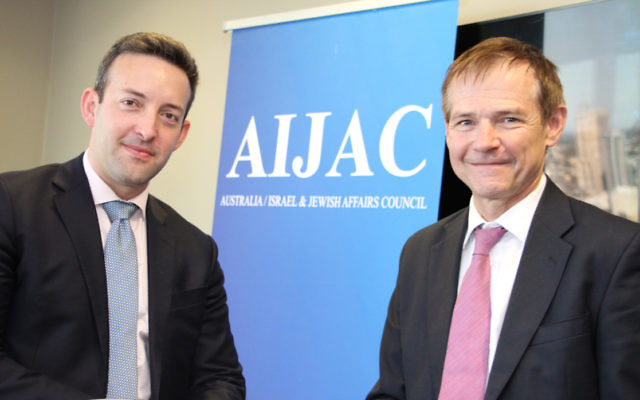 THE potential for Australia to learn from Israel’s “can-do culture” was not lost on Nick Cater and James Brown, who attended a Rambam intensive study tour to Israel in July for Australian journalists and academics.

At a debriefing luncheon in Sydney last week hosted by Rambam program organisers, the Australia/Israel & Jewish Affairs Council, both described touring Tel Aviv’s high-tech scene and having Israeli start-ups pitch directly to them, as eye-opening experiences.

“It was fascinating,” said Brown, research director at the US Studies Centre at the University of Sydney, noting to attain a culture of innovation of Israel’s stature you need  “an environment of free and frank exchange of opinion” and universities that are pragmatic.

“I think we have a distinct problem in Australia where too many of our universities are not actually engaged in solving real problems – and I don’t see that problem in Israel,” Brown said.

“The thing that really stood out for me is the Israeli culture of argument.

“I think that too often, we [Australians] don’t back our ideas with enough conviction.”

Cater, who is executive director of the Menzies Research Centre, a columnist for The Australian and a former editor of The Weekend Australian, said “Israel seemed to me to be even more stable and remarkable a country because of what was happening around it”.

“It’s not accidental – it’s because of the values, principles and institutions put in place by its founders,” he said.

Brown noticed a growing sense within Israel of challenges to social cohesion, but said the country had an important asset to deal with that.

“The ability of all the different groups in society to pull together, not only for national security but for economic and cultural development, was one impression I came away with.”

Another, he said, was the extent of recent co-operation between Israel and Egypt, and with Jordan and the UAE.

“They [Israelis] are essentially preparing for a US that is less engaged in solving the problems of the region, and that’s leading to somewhat more pragmatic organising happening with some unlikely targets,” Brown said.

After speaking with Israelis and Palestinians, Cater and Brown were not confident about prospects for peace on the horizon.

“One thing I found very disheartening was the consequence of the growth in the idea … on the Palestinian side, that any form of normalisation, as they call it, in relation to Israel is a sell-out,” Cater said.

“It’s an absolutist position and it just has the most horrible consequences.

“There was a peace [football] match between Israeli and Palestinian kids, and the Palestinian Authority and the head of the Palestine Olympics movement condemned this as being a terrible thing.”

Eight journalists and academics went on the trip.