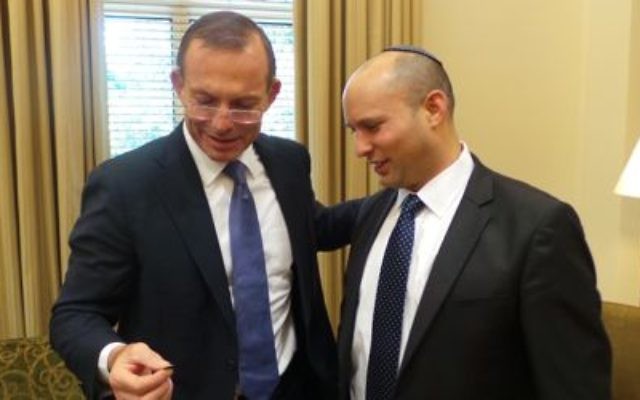 ISRAEL’S Minister of Economy, Minister of Jerusalem and Diaspora Affairs Naftali Bennett declared there is “no one stronger and more connected to Israel” than Australia, at an Australia-Israel Chamber of Commerce (AICC) lunch last Friday.

The chairman of the Jewish Home (Habayit Hayehudi) party visited Australia to meet with Prime Minister Tony Abbott and address the Jewish community in synagogues and community centres in Melbourne and Sydney.

In his meeting with the PM, the two leaders discussed the interim agreement between Iran and the P5+1 and the potential for bolstering Australia-Israel trade.

At the AICC luncheon in Melbourne later that day, Bennett said the PM sympathised with Israel’s concerns over the negotiations in Geneva. He told the audience of 300-plus that Abbott was “warm and courageous about his attitude to Israel” and that he referred to Australia as “Israel’s true Iron Dome”.

Bennett also said Israel has made the mistake of viewing the Diaspora merely as a source of fundraising or aliyah, claiming the relationship “needs to be a partnership”. He called on the business sector to invest in Israel’s high-tech industry, which he branded “one hell of a good investment”.

As well as stressing Israel’s advances in water technology, alternative energy, food and agriculture, medical devices and cyber security, he outlined a number of reasons for investing in the country

First, he said, the Jewish value of “tikkun olam” underpins the services Israeli business provides other countries, triggering a “transformation from just being a start-up nation to being a lighthouse nation. Producing water in Africa, tomatoes in India, protecting America’s cyber security and online banking … this is our new mission, this is what we are about. We need to continue projecting light and doing good.”

Second, he said, Israel is reducing regulation on foreign trade and opening up competition and third, two separate demographics in Israel – the Charedim and the Israeli-Arab female population – are being encouraged to enter the workforce.

Fourth, Israel was blessed with the discovery of natural gas recently and finally, he said, Israel is on the verge of completing a “revolution in its infrastructure”.

“When I was a kid, Beersheba was this faraway place hours away, a small town, a neglected town in the Negev. Now it’s 45 minutes from Tel Aviv to Beersheba.”

Bennett also addressed audiences at Caulfield Hebrew Congregation and at Mizrachi in Melbourne, before flying to Sydney, where he spoke at the Central Synagogue and at an event hosted by Sydney’s AICC and the Israel Trade Commission.