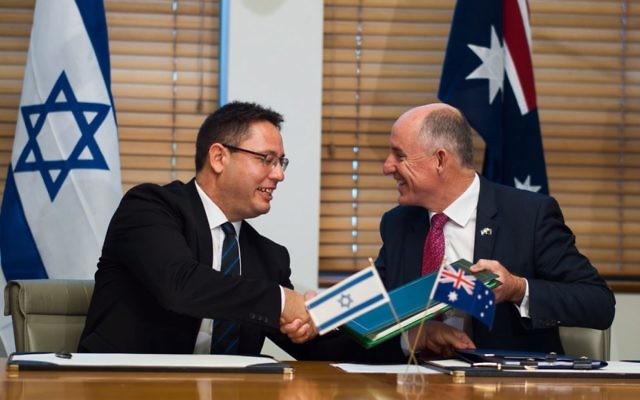 A NEW tax treaty signed late last month between Australia and Israel will “definitely improve cross-border investment and trade opportunities”, the head of banking and finance at one of Israel’s most prominent law firms says.

In September 2016, then treasurer Scott Morrison told an Australia-Israel Chamber of Commerce (AICC) function that negotiations on a treaty had formally commenced.

Announcing the signing on March 28, Treasurer Josh Frydenberg and Assistant Treasurer Stuart Robert said, “In 2017-18 total merchandise trade between Australia and Israel was worth over $1 billion, and Israel’s investment in Australia in 2017 was $301 million.

“This new tax treaty will further strengthen the friendship and commercial relations between our two countries and provide greater opportunities to grow those relationships.”

The treaty will reduce withholding tax rates to create a more favourable bilateral investment environment and make it cheaper for Australian businesses to access Israeli technology. It will reduce potential double taxation and provide greater certainty to taxpayers in Australia and Israel.

Eli Elya, head of banking and finance and the Australia desk at Israeli firm Gornitzky & Co, said it will open new doors for short term investments and particularly long-term investments. “We can see a growing appetite for both countries – for Israelis to invest in Australia and vice versa,” he said.

Israel’s trade commissioner in Australia, Shai Zarivatch, said it would ultimately lead to “an increase in engagement and interaction, which will be reflected in mutual trade and investment deals”.

“There are now 20 Israeli companies listed on the ASX and we expect more to list in the coming months,” he said.

Noting that only 10 Israeli companies were listed on the ASX at the start of 2018, Israeli Embassy spokesperson Eman Amasha said many more would now consider listing.

“Overall, this agreement represents the strengthening trade ties between Israel and Australia and provides a platform for the further growth of business operations and investment cooperation in both markets,” she said.