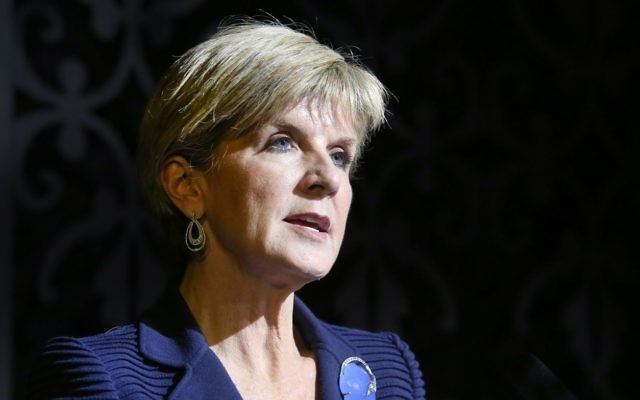 AS Foreign Minister Julie Bishop went on the campaign trail in Melbourne’s Jewish community on Tuesday, communal leaders thanked her for taking a principled stance against an anti-Israel motion put forward at the World Health Organisation (WHO) World Assembly.

Australia was one of just eight countries to reject the motion condemning the Jewish State for violating “mental, physical and environmental health”.

Backed by 107 member nations, it was the only proposal at last week’s gathering that singled out a specific country for criticism.

Co-sponsored by the Arab Group of States and the Palestinian representatives, the motion also called for a WHO delegation to investigate and report back on “the health conditions in the occupied Palestinian territory” and in “the occupied Syrian Golan”.

Writing to Bishop to express their gratitude for Australia’s vote, Australia/Israel & Jewish Affairs Council (AIJAC) national chairman Mark Leibler and executive director Colin Rubenstein noted, “Despite the many extremely serious violations of rights in relation to health in countries such as Syria, the country selected for unique disapprobation was once again Israel.

The letter added that the Australian stand was “all the more honourable, praiseworthy and welcome” because “to their shame, many Western democracies joined the lynch mob declaring, in effect, that Israel was the only nation to violate human rights in this area. It may therefore have been easier for our delegation to go along with the crowd, and abstain or even vote in favour.

Leibler and Rubenstein further pointed out that “Israel has devoted considerable resources to improving the health of residents of the West Bank and Gaza. According to the World Bank, average life expectancy in those areas in 2014 was 73, above that for the wider Middle East and North Africa. This has risen from an estimated 48 in 1967.”

They also noted that hundreds of thousands of Palestinians receive treatment in Israeli hospitals. In 2012 alone, almost 220,000 Palestinian patients were treated, more than 21,000 of them children.

The letter concluded that “these figures go some of the way to demonstrating how ludicrous was the overall vote” on the motion, and expressed AIJAC’s gratitude for Ms Bishop’s leadership “in ensuring Australia, unlike so many other governments, has in exercising its vote in this matter, yet again demonstrated sound judgement, considerable courage and moral clarity”.

Together with the Member for Caulfield David Southwick, they met with Jewish Community Council of Victoria president Jennifer Huppert, Beth Weizmann Community Centre chairman Sam Tatarka and Zionism Victoria vice-president Jeff Morrison to discuss the security needs of the community and Australia’s relationship with Israel.

Bishop also met with women from the Knit One Give One (KOGO) group during her visit and was shown how they knit toys and clothes for disadvantaged children. The Foreign Minister was offered one of the soft toys but politely declined, insisting she didn’t want to take one from children in need.