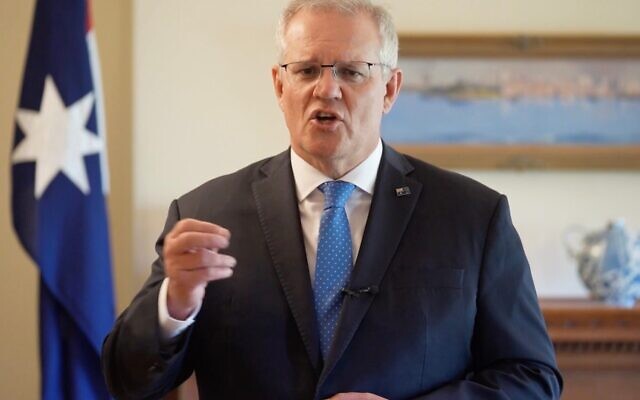 A month after federal Education Minister Alan Tudge told Jewish leaders the IHRA definition was being considered by the Morrison government and that he was “determined to see this implemented and adopted as government policy”, Morrison made the announcement at the Malmo International Forum on Holocaust Remembrance and Combating Antisemitism in Sweden.

“In the history of humanity the Holocaust serves as a perpetual and brutal reminder of exclusion, of racism, of systematic political hatred and evil, itself,” Morrison said via video link.

“My government pledges to embrace the definition of antisemitism adopted by the International Holocaust Remembrance Alliance.

Last night @ScottMorrisonMP announced that Australia is adopting the @TheIHRA definition of anti-semitism.

“Australia does so as a people, and as a nation”

This won’t stop all anti-semitism, but it will make a difference & help people call it out, including on campuses.

“Australia does so as a people, and as a nation. Antisemitism has no place in Australia. It has no place anywhere in the world.

“And we must work together, resolutely and as a global community to reject any word or any act that supports antisemitism towards individuals, towards communities or religious facilities.”

Stating, “Australia has been blessed for generations by the presence of the children of Israel,” Morrison added, “Among them are many whose childhood and youth was destroyed, stolen from them by the darkness and the evil of the Holocaust.

“But their eyes remained defiantly bright, with hope for the future.

“Their example stands as a light that will shine through the ages.”

“It is precisely because we value our friendship with Israel, and our ability to engage on complex matters, that the IHRA’s definition is so important, because it ensures respectful debate, where disagreements are aired without descending into hateful and antisemitic slurs.”

A post shared by The Australian Jewish News (@jewishnews_au)

Welcoming the announcement, Zionist Federation of Australia president Jeremy Leibler said the government had “reconfirmed its commitment to fighting antisemitism”.

“I want to thank the prime minister for his very strong statement on this issue on Wednesday,” he said.

“Antisemitism is increasing around the world and the key to its reduction is education. The IHRA working definition provides the central plank to this educational endeavour. Antisemitism should have no place in our society. It should be defined, identified and rejected.”

Leibler also noted the role that Labor has played in this process. “Opposition Leader Anthony Albanese and Shadow Foreign Minister Penny Wong have publicly endorsed the working definition. The fight against antisemitism is not a partisan issue and we are extremely grateful to have support from the two major political parties.”

“We need to use all tools available to teach Australians about the dangers of antisemitism and to stop hate speech before it turns into violence – as we have seen happen recently, especially in Europe and the United States,” he said.

AIJAC national chairman Mark Leibler added, “We are grateful that Australia’s support for the definition is above politics and embraced by both our major political parties.”

Executive Council of Australian Jewry president Jillian Segal noted, “This is a watershed in Australia in the unending battle against antisemitism.

“It is the beginning, not the end of the journey. In order to make good on the Prime Minister’s pledge that Australia embraces the IHRA working definition as a nation and a people, it will need to be adopted by the public and private sectors, the university sector, civil society, school education systems and sporting organisations among others.”

“Antisemitism should be above partisanship and I hope to see the Greens join Labor and the Coalition in endorsing the IHRA definition soon.”

Anti-Defamation Commission (ADC) chairman Dvir Abramovich said, “Bravo to the federal government for showing the way in the battle against the evil of antisemitism. This is another defeat for Hitler and his modern-day guards of Auschwitz – the Australian neo-Nazis in our midst.

“The ADC has long advocated for this, and actions always speak louder than words. This is a major step forward and we applaud the announcement by PM Morrison. This is an historic day.”

Great news that Australia is adopting the IHRA definition of antisemitism with bipartisan support. I hope NZ will do so one day. The PM said of Holocaust survivors: “Our nation owes a great debt to the miracle of their gentle souls and their gentle wisdom.”https://t.co/JD6k1M0t3Z

Dr Andre Oboler, who served on the Swedish Government’s Expert Group for the Malmo Forum and who has been in Sweden attending the Malmo Forum commented, “It is significant both for the implementation that will follow within Australia, and for our international engagement. It is a reflection of our values, our commitment to human rights, and our engagement as part of the international community in tackling the world’s longest hate.

“It’s been an honour to support the government, along with our other IHRA experts, as we’ve moved towards this important announcement and an absolute privilege to be in the room when the announcement was made.”

Australian Jewish Association (AJA) president Dr David Adler commented, “AJA welcomes this major step. As we unfortunately see a rise in antisemitism in Australia, we need all available tools to combat this bigotry. The IHRA definition will be useful for law enforcement, media and educational institutions.”

However, New Israel Fund Australia said in a statement on Thursday, “We remain concerned about codification of the IHRA working definition of antisemitism and don’t support the government’s decision.

“The working definition is increasingly being used to conflate antisemitism and criticism of Israel. Enshrining the definition into policy and law has not been supported by a wide range of groups, including leading mainstream Jewish-American organisations and even the definition’s lead drafter.

“We’ve already seen how the Trump administration and others have weaponised the IHRA definition of antisemitism to target those who harbour no hatred towards Jews. Doing so has made it more difficult to identify and confront genuine instances of antisemitism.

“We urge the government to remain vigilant about the potential impact of this decision on vibrant discourse, especially on university campuses and in civil society.”