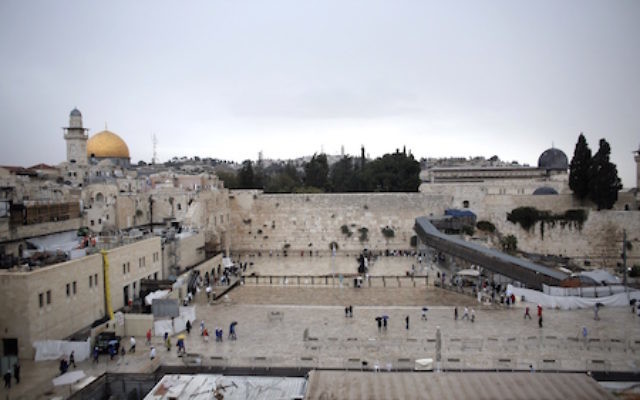 A view of the Western Wall and the Dome of the Rock in Jerusalem. Photo: Ahmad Gharabli/AFP/Getty Images.

THE Australian government has been urged to denounce a United Nations Educational, Scientific and Cultural Organisation (UNESCO) resolution that ignores Jewish ties to the Temple Mount and Kotel.

Although Australia is not a member of UNESCO’s board, the Executive Council of Australian Jewry (ECAJ) wrote to Foreign Minister Julie Bishop and asked her to speak out on behalf of all serious scholars in the world.

“We respectfully request that the Australian government give urgent consideration to issuing a public statement, through you, denouncing the resolution that was just passed in committee, and urging the Executive Board of UNESCO to reject it,” the ECAJ wrote prior to the resolution being passed by the executive on Wednesday morning (Australian time).

“The resolution similarly refers to the Western Wall, the last standing structure of the Second Temple, only by its Muslim name “al-Burak”, and pointedly omits its Hebrew name, Ha-Kotel, as well as its English name,” the letter said.

“These are matters that unite the entire Jewish people, regardless of our diverse political beliefs or variations of religious observance.

“They lie at the core of our history and identity as a people.

“The location of the Biblical Temples on the Temple Mount is a fact that is attested to by an abundance of documentary and physical archaeological evidence, which no serious scholar disputes.”

The ECAJ said that by erasing these facts UNESCO has become “a party to the falsification of history for crude and transparently political purposes, and has disrespected both Judaism and Christianity”.

The motion, which Hamas has claimed is a “victory” for the Palestinian people, was supported by 24 nations, including Mexico which later withdrew its support, while six voted against and 26 abstained.

The six countries which voted against the motion were Estonia, Germany, Lithuania, The Netherlands, the United Kingdom and the United States.

Australia/Israel & Jewish Affairs Council executive director Dr Colin Rubenstein said UNESCO has brought disgrace upon itself by ignoring over 3000 years of the Jewish history of Jerusalem in a blatant exercise in political bullying.

“To deny Jews our history is anti-Semitism plain and simple,” Rubenstein said.

“This farcical vote will only empower extremist and recalcitrant elements and damage prospects for a peaceful outcome to the Israeli-Palestinian conflict.”

Zionist Federation of Australia president Danny Lamm was equally outraged by the resolution.

“What a shameful and disappointing day, yet another stain on the United Nations which has veered so far away from the foundations upon which it was built,” Lamm said.

“Perhaps UNESCO will next pronounce the world to be flat after all.

“It is disappointing that 24 countries shamed themselves by playing along with this charade.

“Iran, Lebanon and Qatar who all voted in favour of the motion are certainly not the countries that we in the free and democratic world are aspiring to be, but I was surprised with some of the other countries that voted for, like Mexico and Brazil which have large Roman Catholic populations and therefore took part in this subterfuge of their own religious tenets.”

Lamm also said that countries such as France, Sweden and Greece, which were among those who abstained should be ashamed.

“Jerusalem is and always has been the beating heart of the Jewish people.

“To deny Jerusalem as a part of the Jewish narrative is to suggest that the body does not need the heart in order to continue breathing.”