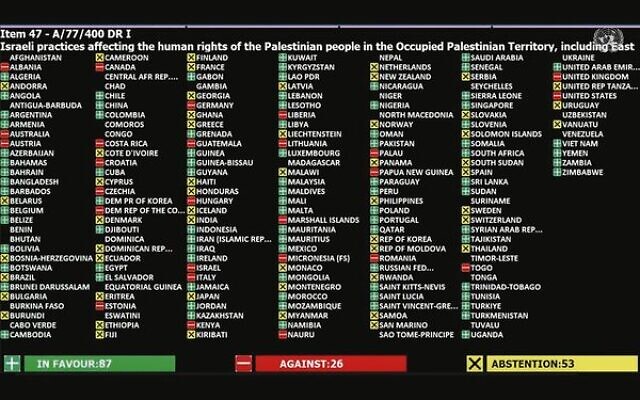 How the countries voted.

Jewish communal organisations have commended the Australian government for its “No” vote on an anti-Israel UN General Assembly resolution late last month.

The December 30 vote referred Israel’s “occupation, settlement and annexation of Palestinian territory” to the International Court of Justice (ICJ) for an advisory opinion, while referring to the Temple Mount in Jerusalem only by its Muslim name, Haram al-Sharif.

Australia joined 25 other nations in opposing it; 87 voted in favour, while there were 53 abstentions.

“The UN has once more embarked on the costly charade of trying to dress up its perennial one-eyed animus against Israel with the veneer of legality,” said Executive Council of Australian Jewry co-CEO Peter Wertheim.

“It did not work with the widely dismissed Advisory Opinion of the International Court of Justice in 2004 and it will not work this time either.”

He said by refusing to hold Palestinian leaders accountable for “their disastrous decisions” which have prolonged the conflict and by placing blame only on Israel, the UN was helping to perpetuate the conflict.

“The reflexive and uncritical embrace of the Palestinian ‘narrative’ has always been morally untenable, but now more and more nations are coming to realise it,” Wertheim said.

“The UN’s determination to do whatever the Palestinians ask of it reinforces Israel’s and the Australian Jewish community’s sincere doubts about any position the UN takes on the Israeli-Palestinian conflict,” he said.

“Like so many other UN actions, this resolution has made peace harder to achieve because it has rewarded Palestinian intransigence.”

Calling the resolution “as predictable as it was odious”, Australia/Israel & Jewish Affairs Council executive director Colin Rubenstein added that it was “an utterly contemptible example of the UN’s ridiculous bias and moral bankruptcy”.

“Any anti-Israel campaign, no matter how far removed from reality or how damaging to the cause of genuine peace, still remains guaranteed a majority at the UN General Assembly,” he said.

But Rubenstein noted “some positive trends in UN voting with a majority of UN states refusing to provide support for this ugly, discriminatory and completely unhelpful new resolution – which will both politicise international law and perpetuate the Palestinian leadership’s counterproductive stance of preferring demonisation of Israel in international forums to engaging in genuine negotiations”.