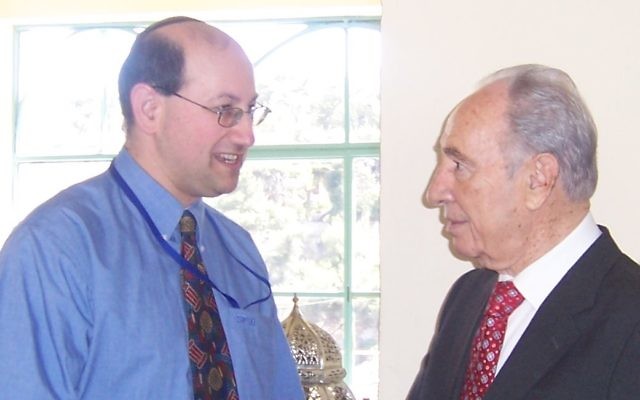 So said Shimon Peres, the last of Israel’s founding generation of leaders, a giant among statesmen who has now sadly left Israel and the Jewish world and passed from the world stage.

Shimon Peres was known as a former Israeli government hawk who became a committed dove, but at all times he remained a confirmed optimist with a positive, can-do -attitude.

As a young official in the Ministry of Defence in the 1950s, Shimon Peres was instrumental in establishing close relations with France, securing massive amounts of quality arms, including Mirage jet fighters, and establishing the Dimona nuclear reactor.

After Israel’s spectacular victory in the 1967 war, he became a leading advocate of Israel making peace with its neighbours, including the Palestinians, and in 1994 he won the Nobel Peace Prize for his efforts.

Shimon Peres personified the quality of leadership that is so often lacking in the contemporary world.

He dared to dream, and to live up to his own high standards: “To find a cause that’s larger than yourself and then to give your life to it.”

He was an inspiration to all of us and will be sorely missed.

We are deeply saddened to hear the news of the passing of former Israeli president, prime minister and Nobel Peace Prize laureate Shimon Peres.

Shimon Peres was a brave and courageous soldier and politician, who never gave up on the ultimate battle for peace. He was internationally respected at the highest political levels. At the same time, even into his tenth decade, he was at the forefront of Israeli innovation, strongly promoting Israel as a nation of cutting-edge technology and creativity. He was and always will be an extremely important part of the narrative of Israel. It is going to be hard to imagine Israel without Shimon Peres as a part of it.

Shimon Peres was a true visionary, a giant of Israeli politics, the quintessential statesman on the world stage.

As a founding father of Israel, his uplifting and constructive influence on the Jewish State’s evolution continued until the end of his life.

A pragmatist, at a fraught time he embraced the peace process even though its outcomes remain far from complete. Always the optimist, just two months ago he inspired an AIJAC Rambam group who visited him in his office with his uplifting words of never giving up hope and always striving to better ourselves and the world. At this time our thoughts are with his family and the people of Israel. His memory will long remain an inspiration and he will be sorely missed.

The ADC mourns the death of Shimon Peres, a towering statesman of enduring strength, steadfast leadership and remarkable devotion to the State of Israel who leaves behind a great legacy. A giant of the founding generation, he was there from the very beginning, taking part in the country’s building and development of the state in many capacities, always engaged and passionate in overcoming the grave challenges the nation faced. A respected figure at home and abroad who offered hope and vision for the future, with his passing, a momentous chapter in the homeland’s history closes. Our heartfelt condolences to his family and friends. He shall be sorely missed.

NSW Jewish Board of Deputies

Shimon Peres is the last of a great generation and his contribution to Israel and the Jewish people is immeasurable.

A poet-statesman is a rare commodity and his intellect and compassion will be greatly missed by the nation. He strove for peace and in each and every position he held he was a leader of whom Israel could be proud.

Shimon Peres was a great visionary, leader, statesman and peacemaker, whose life story was intertwined with that of Israel. His presence will be missed by Israel and the Jewish community around the world.

Although he was someone who’d made history, he was always more interested in talking about the future. When we first met he was already 90, but he spoke as if he was just setting out to solve the world’s problems with fresh solutions.

He was always positive and optimistic about how science and technology could help bring peace to the Middle East, feed a hungry world, and lift countries out of poverty. Shimon Peres will be deeply missed by all peace-loving people.

My prayers are with the family of Shimon Peres, BDE. Over the past three decades, I had the fortune to be in meetings with him on many occasions. The first time I had an opportunity to speak with him (on the subject of anti-Semitism) he said, “You are a typical Jew.” I was taken aback, before he added, “Always pessimistic and always enthusiastic”. At this sad time, I am not especially pessimistic or enthusiastic – just hopeful that humankind will allow his visions, of mutual understanding and cooperation for the common good, to prevail.