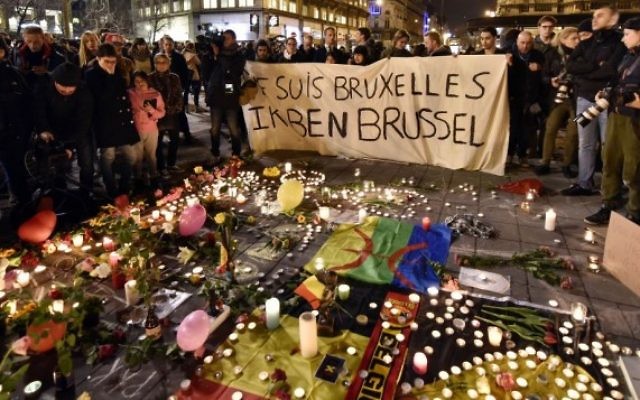 People holding a banner reading "I am Brussels" behind flowers and candles to mourn for the victims at Place de la Bourse in the centre of Brussels.

AUSTRALIA’S Jewish leaders have expressed their shock and outrage at yesterday’s terrorist bombings in Brussels, which left more than 30 people dead.

Writing to Belgium ambassador to Australia Jean-Luc Bodson, Executive Council of Australian Jewry president Robert Goot and executive director Peter Wertheim said, “We write to convey to you, the Belgian government and the people of Belgium our shock and disgust on learning of yesterday’s two terrorist bombings at Brussels’ Zaventem airport and the further bombing of a metro station in the district of Maalbeek.”

They said while the details remain sketchy, there can be “little doubt that among the targets were civilians going about their daily lives, which adds an even more sinister dimension to this disgraceful atrocity”.

“At this difficult time, we wish simply to express our feelings of sadness and support for the Belgian people,” Goot and Wertheim said.

“We ask you to convey our condolences to the bereaved families of those who were killed and our best wishes to the injured for a speedy and complete recovery.”

President of the Zionist Federation of Australia Danny Lamm sent his deepest condolences to the families of those killed in the attacks, and sent his wishes for a speedy recovery for all wounded.

“We mourn every single life lost in these cowardly acts of terror against freedom and democracy,” Lamm said.

“With every act of terror, be in it the streets of Brussels, Istanbul, Paris or Jerusalem, we are reminded that terrorism is a global issue which can only be defeated by a global effort. Today we stand in solidarity with the people of Brussels and Istanbul, and with all those in the world who value life over a culture of hate.”

B’nai B’rith Anti-Defamation Commission chairman Dvir Abramovich said his organisation is “outraged and horrified by these despicable and barbaric” attacks.

“Our heartfelt thoughts, sympathies and prayers are with the families and loved ones of the victims, and we and wish the wounded a full and speedy recovery,” he said.

“During this heartbreaking period of grief and mourning, we stand firmly with the Belgian people and government as they come to grips with this shattering and traumatic event and seek to bring  those who carried out these senseless massacres to justice.”

Abramovich said once again, we are reminded that “no-one is safe until the evil of radical Islamist terrorism, that knows no bounds or borders, is destroyed”.

“It is the responsibility of the international community to unite in the battle against Jihadist global terrorism,” he said.

“We must prevail in this struggle against violent extremism so as to ensure that the lives of all citizens are protected, and that the shared values of democracy and freedom are secure.”