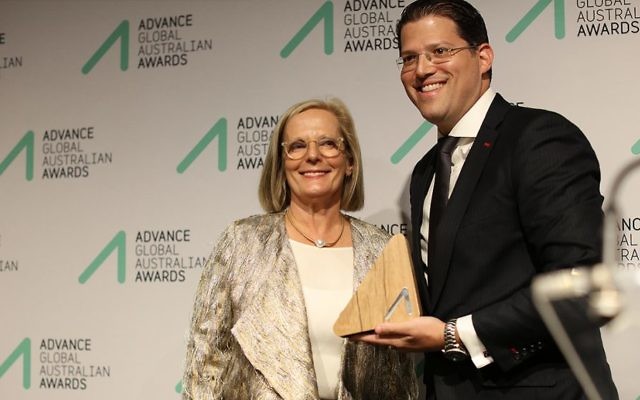 He was among nine winners considered for the award, announced last week at a dinner at the Art Gallery of NSW.

“I lost a lot of bets because I told people at the office I wasn’t going to win this; it’s a big surprise,” Balkin said.

He recalled how in 2012, he walked out of a “really good job at a really good company” because he was both curious and frustrated about the direction financial services was heading in globally.

“I quit my job, booked a one-way ticket, packed half a bag and landed in a country that was going through a severe recession, in an industry that had lost its way, and in the toughest city on earth,” Balkin said.

The only problem was that all he had was an “Aussie passport and a 90-day tourist visa”.

“I had no job, no contacts, no friends and frankly, no bloody idea what I was getting myself into.”

A leading international expert on ethics in banking, fintech and the strategic engagement of millennials in financial services, Balkin is a World Economic Forum Young Global Leader and an acclaimed author.

He has a long history of involvement in the Sydney Jewish community: he is the son of JCA stalwart David Balkin and served on the JCA fundraising committee.

He dedicated the award to his father and mother Rosemary, stating, “Everything I have achieved in my life – professionally and personally – is because of their sacrifice, their hard work, their role modelling, their values. Mum and Dad, this is for you: thank you.”

Noting that Balkin has run six marathons and visited Mount Everest Base Camp in Nepal, raising millions for a range of charities, Advance Global CEO Serafina Maiorano said he exhibits “remarkable skill and passion, not only for his extraordinary career, but also for life”.

“He typifies the idea of the ‘Born Global’ Australian, thought leader and innovator. For him, it’s a natural instinct to make a positive social impact in the world,” she said.