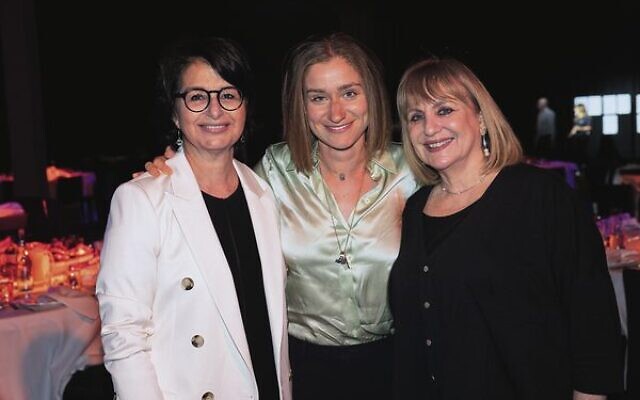 JOURNALIST Eve Barlow has urged Yad Vashem and other museums to contextualise the Holocaust “in the modern-day”, in the wake of Palestinian leader Mahmoud Abbas’ “horrendous Holocaust revisionism”.

Barlow, an outspoken Zionist, was the main speaker at a WIZO NSW gala brunch on Sunday, which was attended by over 300 guests including Israeli ambassador Amir Maimon.

Abbas made headlines while in Berlin for his shock comments accusing Israel of committing “50 holocausts” against Palestinians. He was rightly condemned by Germany and Israel, but Barlow said the incident highlights a need for Yad Vashem and Holocaust museums to bring people “up to speed to with antisemitism and how it’s manifested”.

One kid asked me today what to do about Bella Hadid and Dua Lipa, and why their narrative is championed and Jews who defend Israel are hated. I said: "Is Dua Lipa going to be Barbra Streisand in 60 years time?" The answer is no. Look around us. Jews are awesome. We've got this.

“It’s something I felt at the end of my time at Yad Vashem a couple of weeks ago,” Barlow told the audience.

“If I was a non-Jewish person walking around Yad Vashem and I was looking specifically at the early exhibits, where you see how Jews were slowly but surely dehumanised, you could perhaps say this form of antisemitism wouldn’t exist anymore – we don’t force Jews to declare themselves to the public by wearing yellow stars.

“But I feel a pressing need in these museums for something that shows that the Holocaust isn’t a closed book. It’s not a story that just ended in 1945 with the liberation of the camps and it is not an anomaly of history.

“The Holocaust didn’t happen out of nowhere, as we know. We know it as the greatest attempt in modern history to expel us from the earth, but we know that for thousands of years, and century after century, pogroms and expulsions of Jews have happened all over the world.”

I just spoke to an assembly of 150 high school students in Melbourne. When asked to raise their hands if they’d experienced antisemitic hate, about 90% of the room put theirs up. pic.twitter.com/TstVtTHli3

Barlow said it is particularly important now, with the numbers of Holocaust survivors dwindling, that these lessons of history are taught.

“It’s the responsibility of places like Yad Vashem to start doing the work of contextualising [the Holocaust] in the modern-day”.