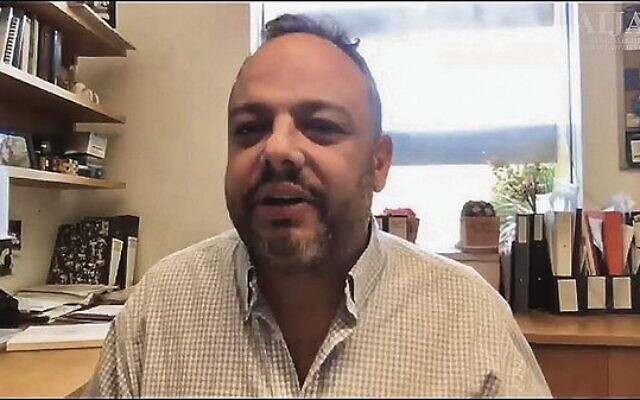 ADDITIONAL countries are close to joining the Abraham Accords, respected diplomat Tal Becker has told Australian audiences on the anniversary of the landmark diplomatic breakthrough.

Becker, a peace negotiator and director of legal affairs for Israel’s Ministry of Foreign Affairs, was one of the key diplomats involved in laying the groundwork for the agreements. He addressed a special Australia/Israel & Jewish Affairs Council (AIJAC) webinar on September 13.

Speaking courtesy of the Israeli Foreign Ministry, Becker was effusive over what the Abraham Accords had already achieved and how they may influence regional peacemaking moving forward.

“My involvement in drafting and negotiating the Abraham Accords was for me very meaningful,” said Becker, proudly showing off the pens used to sign the historic agreements.

“It was nice to be involved in drafting something that was finally signed and hopefully it will have in the end a positive impact on the Israeli-Palestinian relationship as well.”

Becker hinted that additional countries are close to joining the Abraham Accords, but did not elaborate.

He said the agreements were driven by a variety of common interests, including the Iranian threat, combined with the trend of the disengagement of the US from direct involvement in regional defence.

Becker said the Palestinian expectation of a perpetual veto over normalisation between Arab countries and Israel had been “unnatural” and proved to be unsustainable.

“Most countries [foreign policy] tend to pursue their interests,” he noted. “That’s what they do, and in our relations particularly with the Gulf states, the convergence of interest was very striking and it came to a point where it seemed, at least to me, unnatural for those interests to be held hostage to … the Israeli-Palestinian dynamic.”

But he hoped the Accords can eventually build popular Palestinian acceptance of Israel’s legitimacy as a Jewish state.

“The Abraham Accords give expression [to the] idea … that the Middle East is made up of different peoples who call it their home, who belong here, and one of those peoples is the Jewish people … The fact that … there are Arab states willing to speak in that way, I think, gives more legitimacy and resonance to a kind of dialogue that will perhaps enable a different Palestinian voice to emerge over time.”

Becker added, “That doesn’t mean we don’t need to work today with the Palestinians to try to improve the situation.”