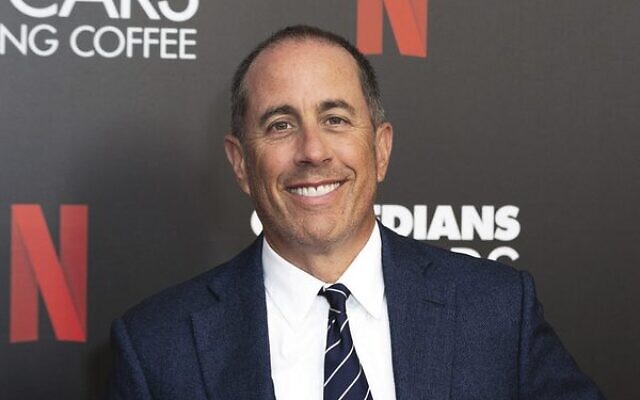 When comedian Jerry Seinfeld purchased an old VW Beetle in New Mexico and along with a friend, drove it home up the east coast of the USA, an idea formed. What if he could film other comedians as they drove around together? Would that make for an entertaining series?

“We were laughing, and I was thinking people would enjoy listening to this nonsense,” Seinfeld told Vanity Fair.

While the initial concept began as an experiment, it very quickly blew up.

Why, then, is it about comedians in cars rather than in front of a studio audience? Well, Seinfeld explained that comedians let their guard down when there’s no one really watching.

Like Seinfeld, it has been described as a show “about nothing” yet it always grabbed people’s attention.

“Part of what makes the show watchable is that it’s always moving,” Seinfeld told David Letterman.

“There’s no narrative [to] drive the story. We know what happens. We know they’re going to get coffee. You need a kinetic energy to move it along. Moving people around keeps them awake.”

There are no writers or directors, so Seinfeld is firmly in the driver’s seat (pun intended).

Since it began in 2012, Comedians in Cars Getting Coffee has been streamed hundreds of millions of times – especially since moving to Netflix in 2017 – and was nominated for multiple Emmy awards and won five Producers Guild Awards.

Over 11 seasons, Seinfeld spoke to Mel Brooks, Tina Fey, and then-president Barack Obama, which Seinfeld admitted he was most nervous for.

“I didn’t want to waste his time, for obvious reasons,” Seinfeld told USA Today. “I was very appreciative that they were even letting me do that, that he was willing to do that. That’s not like sitting with Jamie Foxx. It’s a very different energy.” 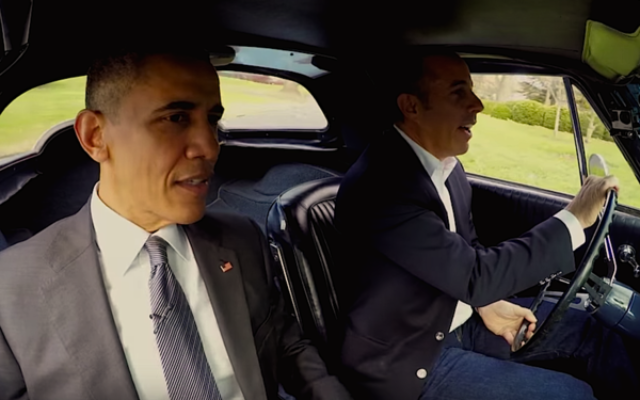 US president Barack Obama with Jerry Seinfeld in an episode of Comedians in Cars Getting Coffee. Photo: screenshot

And now, celebrating the show’s 10th anniversary, Seinfeld has released an accompanying book – a coffee table book, of course, The Comedians in Cars Getting Coffee Book.

The book offers a behind-the-scenes look at the series with transcripts from notable chats, stills from the production, a history of the show from crew and guests, and an introduction by Seinfeld himself.

Transcripts are split into sections about growing up, getting started in comedy, relationships, Seinfeld the series and more. And many of the excerpts are brand new, never having made it to the streamed show.

Each episode took three hours to shoot, yet they were whittled down to between eight and 20 minutes.

And for anyone on the fence about the book itself, the photos are worth every dollar spent.

The images include some of comedians who have passed away and each photo captures the essence of both Seinfeld and his guest to a T.

Most images are hilariously raw, with the featured comedian and Seinfeld sharing a big belly laugh at the other’s story.

The fact that Seinfeld didn’t even know this show would work, yet he still managed to get some of the biggest names in the world to sit down, have a chat and enjoy a coffee with him, speaks volumes about the comedian himself. He acknowledged that it’s such a personal project and he’s amazed at how popular it became. After all, it really was just two people catching up for a chat.

“There’s this other side of my life that was about just hanging out with these crazy people and was just as great for me as the career part,” Seinfeld told USA Today.

Seinfeld told Vanity Fair, “It’s very hard to describe what Jerry Lewis meant to me as a kid, and to be sitting in a car with him and having coffee with him, that was an unreal moment for me.”

While it would be easy for the comedians to slip into non-G-rated comedy, Seinfeld was adamant that the series be family-friendly. And that’s exactly what happens, with a lot of brand-new, never-before-heard material. “If I tell someone a story and they laugh, I’m going to tell it 10 more times to 10 more people to hear that laugh,” Seinfeld said to Vanity Fair, hinting that a lot of what was said in the show could go on to form the basis of new stand-up shows.

Throughout its streaming, Comedians in Cars Getting Coffee has been described as “real” insight into the lives of those in the car.

“For viewers, the lack of fanfare and production makes us voyeurs to the lives of comedians,” Vulture noted.

“The best episodes are the ones that really make you feel like you’ve been eavesdropping on a private moment between friends.”

Indeed, The Comedians in Cars Getting Coffee Book is an extension of this feeling – a genuine look into the friendship between Seinfeld and his guests, and genuine insight into how comedy truly comes about.

The Comedians in Cars Getting Coffee Book is published by Simon & Schuster, $59.99 rrp