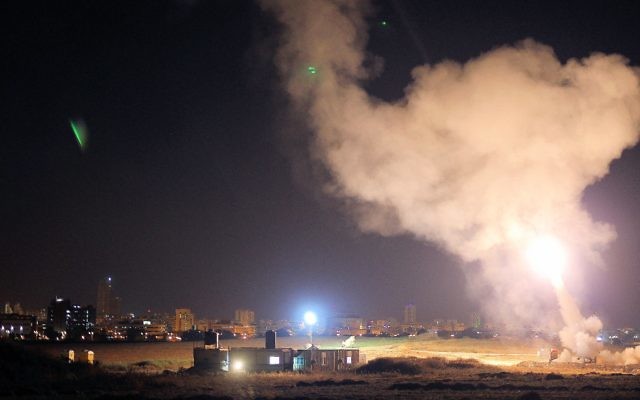 Forty rockets from Gaza were fired at Israel by early afternoon Wednesday, with Iron Dome intercepting eight. Sirens were heard throughout southern Israel and in the center of the country, including in Tel Aviv, Rishon Lezion, Modiin and Raanana.

The Israel Defense Forces said in a statement that the military struck about 160 of what it called “terror sites” throughout the Gaza Strip late Tuesday night as part of Operation Protective Edge, which began the previous night. Among the sites hit, the IDF said, were 118 concealed rocket launching sites; weapon storage facilities; 10 tunnels; six Hamas facilities; and 10 terror command positions.

Terror groups in Gaza shot about 45 rockets at Israel on Tuesday evening, striking major Israeli cities in the south and the center of the country. One rocket landed in Hadera, in northern Israel, some 70 miles from Gaza. The IDF said the rocket that hit Hadera was similar to the ones it found on the Klos-c, a vessel that contained an Iranian shipment of advanced weaponry intended for terrorist organizations operating in the Gaza Strip that was intercepted by the Israeli military on March 5.

Israel has been calling the homes of Palestinian civilians in Gaza to warn them to evacuate before launching airstrikes in their neighborhoods, The New York Times reported.

Meanwhile, the U.S. Embassy in Tel Aviv said in a statement that it will be operating with a skeleton staff until further notice due to the “July 8 rocket attacks on Tel Aviv and potential for further attacks.” The staff of Israel’s diplomatic missions will not be allowed to travel south of Tel Aviv without prior approval, according to the statement.