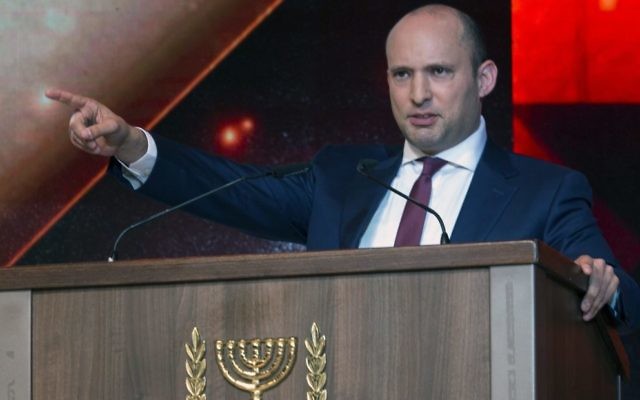 JERUSALEM – For Israel’s settlers, being the butt of criticism has never been such a boon. Two weeks after the UN Security Council adopted a new anti-settlements resolution and a week after John Kerry delivered an hour-long speech against Israel’s West Bank policies, the settler camp is buoyant.

Naftali Bennett, champion of the settler cause and leader of the rightist Jewish Home party is never out of the news or off the TV screens, and is positioning himself as the man who has answers to international criticism.

Famous for a campaign video in which he told Israelis to “stop apologising,” Bennett is defiantly insisting that the only answer when the international community criticises Israel on settlements is defiance.

Fuchs said Netanyahu was unable to convince the US to veto the resolution and his response when it passed was seen as “quite pathetic”. By contrast, Bennett is positioning himself as a doer, and already, this week, announced plans to fly in the face of the international community and start integrating parts of the West Bank in to Israel.

Bennett doesn’t just oppose Kerry’s insistence that settlement building should be curbed – he wants to extend full Israeli sovereignty over large parts of the West Bank, in a process known as annexation. On Sunday, he announced that before January is up, he will submit legislation to make the settlement of Ma’ale Adumim a fully-fledged part of Israel. If this passes, it will represent a new chapter in Israel’s West Bank policy, and cause outrage in the international community.

Kerry spoke strongly against this idea of annexation, and said that if Israel rules out a Palestinian state and decides only to have one country between the Jordan River and the Mediterranean then “Israel can either be Jewish or democratic – it cannot be both – and it won’t ever really be at peace.”

But instead of convincing Israelis, Kerry, and the UN resolution that he was speaking about, are having the opposite effect on many, according to analysts. Discussing Bennett’s desire to begin annexation, Yoram Meital, chairman of the Chaim Herzog Centre for Middle East Studies at Ben Gurion University, told The AJN: “We will hear more voices like this following the vote at the UN.”

These voices promote a simple equation: Israelis are either patriotic and

pro-settlements, or setting themselves up for international criticism. “Israel must do some soul-searching over its conduct in the last 25 years, from adopting the Oslo Accords to the Bar-Ilan speech,” Bennett said, referring to the peace process of the 1990s and Netanyahu’s 2009 speech embracing the two-state solution.

Bennett said: “The season of mimicry is over: You’re either [part of the] national camp and against a Palestinian state, or we’re getting UN resolutions against us. There is no middle ground.”

It’s a view that some on the left and in the centre strongly reject, saying that the new resolution makes it easier, not harder, for people to oppose settlements without compromising their support for Israel. Former MK Einat Wilf argued that with the resolution, the UN Security Council is “clarifying the absolute legality of the territory of Israel within the 1949 ceasefire lines, including west Jerusalem”. The rest of the territory under Israeli control, as she sees it, is a matter to be determined by peace talks.

But Wilf’s argument is unlikely to get much air-time in Israel over the coming weeks. As preparations get underway for the inauguration of Donald Trump as US President on January 20, Bennett and the settler camp are likely to, once again, dominate Israel’s national discourse.

This is because they are about to see a US administration that will be more open than any other to their ambitions – if  Trump’s criticism of Kerry’s speech, what he has said so far about the conflict and his pick of settlement patron David Friedman as his ambassador to Israel are anything to go by. Bennett reacted to Trump’s election by calling it an “opportunity for Israel to immediately retract the notion of a Palestinian state in the centre of the country, which would hurt our security and just cause.”

Meital said that as inauguration day nears, Bennett’s camp sees the change in the White House as “a message that it’s their time, an historic opportunity to increase Israeli control in the West Bank”.

By contrast to Bennett’s buoyancy, Netanyahu has emerged from recent events with little to say to his nation, apart from that he is angry towards the UN and that he wants to drudge up the specifics of how the resolution passed while venting against a US administration that is in its final days.

“Israel hopes that the outgoing Obama Administration will prevent any more damage being done to Israel at the UN in its waning days,” Netanyahu said. “I wish I could be comforted by the promise that the US says we will not bring any more resolutions to the UN. That’s what they said about the previous resolution.

“We have it on absolutely incontestable evidence that the United States organised, advanced and brought this resolution to the United Nations Security Council. We’ll share that information with the incoming administration.”