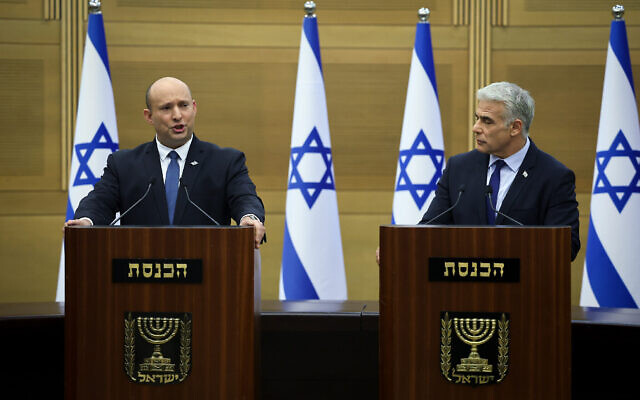 At a press conference Monday evening confirming they intend to dissolve parliament and call new elections, Prime Minister Naftali Bennett and Foreign Minister Yair Lapid extolled their short-lived government and said all their actions, including the decision to bring the current coalition to an end, were taken for the good of the country.

The coalition had recently limped from crisis to crisis, and faced the real possibility of the opposition clinching a majority to bring it down. Instead, Bennett and Lapid decided to end things on their own terms, announcing they will initiate legislation next week to dissolve parliament and send Israel to its fifth general election in three-and-a-half years.

Bennett cited the coalition’s failure to pass legislation to renew the application of some Israeli law to West Bank settlers as the immediate catalyst. The opposition supports the measure, set to expire at the end of June, but has voted against it in order to further destabilise the government.

“Last Friday, I was told by security officials and lawyers that with the [scheduled] expiration of the Judea and Samaria regulations [at the end of June], the State of Israel will fall into chaos. I will not allow this,” Bennett said while standing alongside Lapid in a primetime address. Thus, he said,  he and Lapid “decided to work together to dissolve the Knesset and set an agreed date for elections” — which are scheduled in principle for October 25.

The Knesset’s dissolution will lead to the settler law measure being automatically extended for six months.

Bennett likened the situation to the biblical judgment of King Solomon, in which two women claimed to be a baby’s mother and the king suggested cutting the baby in two in order to award each woman half a baby, and then ruled that the woman who was unwilling to tolerate harm to the child was the true mother. “We chose to be the mother that saves the baby’s life,” Bennett said. 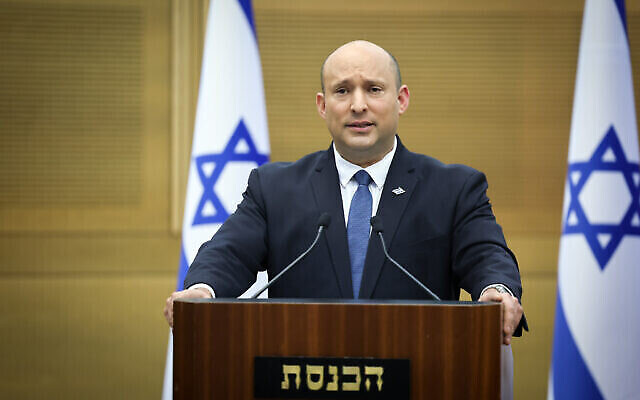 He said that taking apart the government was “not an easy moment,” but was the right move for the country.

Bennett and Lapid said they planned to bring a bill to dissolve Knesset to vote next week, and it can be expected as early as Monday and pass rapidly, setting elections for the fall. In the interim, Lapid will take the reins as prime minister.

“We wanted to continue, believe me, no stone was left unturned. Not for our honour — but for the honor of this beautiful country,” Bennett said. “This was the hardest process of my life, but also the most Zionist.”

Speaking with visible emotion, Bennett eulogised his government as “a good government” that “pulled Israel out of a pit” –saved it from an extended political crisis, improved the country’s security and political climate, prevented a new Iran nuclear deal without harming US-Israel ties, and “boosted national dignity.”

“We proved you could put disagreements aside for the sake of the state,” he said. 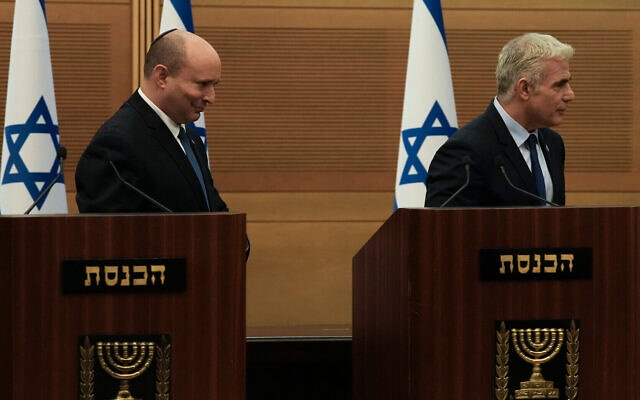 Bennett and Lapid constructed Israel’s most diverse coalition ever, that set out with 62 MKs from eight parties spanning the political spectrum from left, right and centre. But it lost its majority in April, bleeding MKs and — for several weeks, the entire Ra’am party — and faced multiplying political crises.

It was formed on the premise of focusing on the majority of social issues the coalition could agree upon and maintaining the status quo on security and ideological issues that could tear it apart. But ultimately the coalition was felled by the latter.

“What has happened in the past few days, what has happened here tonight, is further proof that the Israeli system is in need of serious change and major repairs,” Lapid said.

“What we need to do today is go back to the concept of Israeli unity. Not to let dark forces tear us apart from within. To remind ourselves that we love one another, love our country,” the foreign minister added.

Bennett said forming the current government had “seemed impossible.” But “we formed a good government, and together we got Israel out of the slump. Israel went back to being governed.” 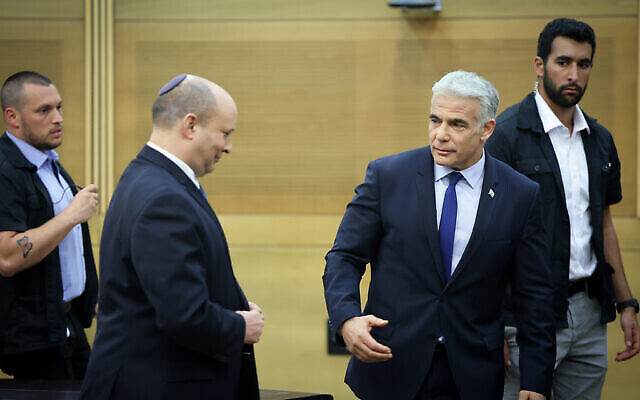 Lapid indicated his commitment to building on many of the current priorities, and said he would not ignore economic and security issues during his interim period as prime minister.

“Even if we are going to elections in a few months, the challenges we face will not wait. We need to tackle the cost of living, wage the campaign against Iran, Hamas and Hezbollah, and stand against the forces threatening to turn Israel into a non-democratic country,” Lapid said.

With the dissolution vote expected next week, Bennett said that he plans to lead an “orderly handover in the coming days” for the incoming prime minister.

“I will do everything so that the transition is successful and comprehensive,” Bennett said, adding that he and Lapid, who he called a leader and a mensch, “have disagreements but we are acting together.” Lapid said in response: “I want to thank you for our friendship; I love you very much.”

Summing up their year-long tenure in Israel’s 36th government, Bennett said he was “so proud of what we did.”

“What we did, not what I did, because we worked together,” he stressed, saying “How good it was to work together.”

Echoing the theme, Lapid closed his remarks by saying: “Only together will we prevail.”