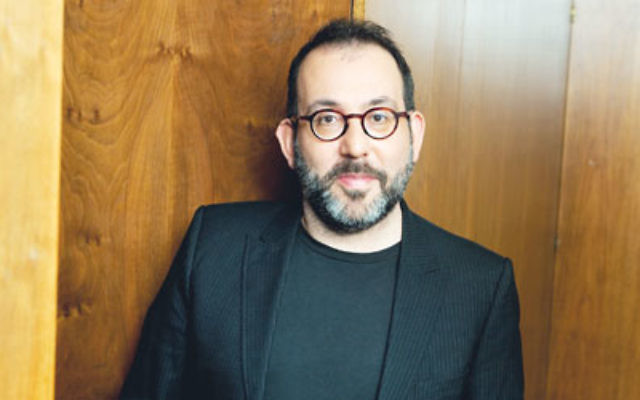 I’M huddled up in a scratchy coat to shield myself from the biting wind as I hasten from the Brandenburg Tor down Unter den Linden in the heart of historic Berlin. And I’m expecting a similarly frosty reception from Barrie Kosky, the Australian enfant terrible now into his second season as Intendant of one of Germany’s main opera houses, the Komische Oper.

As the imposing, boxlike building comes into view, so does its current marketing slogan, emblazoned on the façade: “So ein Glück!” (What luck!”). An unexpected, heart-warming phrase against the winter chill. Kosky is going to explain, no doubt, exactly why he considers himself so lucky to be at the helm of this century-old, generously funded institution.

In a plush booth of the elegant Dressler bistro next door, I await the renegade director who launched his career in the 1990s with Australian productions of Der Dybbuk and The Operated Jew.

The first non-German at the helm of Berlin’s niche operetta theatre, Barrie Kosky has certainly used his perspective as an ‘outsider’ to reinvent tradition.

In fact, he has postponed or delayed our meeting three times citing illness or rehearsal stress – and once to walk his dog Blomfeld, the abandoned cocker spaniel he rescued in Vienna almost a decade ago.

But the bespectacled 46-year-old is gracious and not too impatient when we finally speak, and even seems pleased to be interviewed by a fellow Aussie expat. I ask if he, too, was “rescued” by Berlin, an artistic hub to which Australian creatives flock as if they were refugees.

“I do feel that I never belonged culturally or artistically in Australia,” he reflects. “That is a very personal feeling. I’ve always been homeless; I didn’t quite know where my home is. I still feel that, but I feel that less in Berlin. And I certainly feel artistically, at the Komische Oper ever since I did my first production there in 2003, very much at home.”

At this point I have to ask about those iconic, jewel-encrusted rings he wears on each finger – are they a family tradition? Talismans against this feeling of alienation? “My rings? There’s no story behind them,” he says brusquely. Then he relents and explains: “My Hungarian grandmother had a lot of jewellery and I remember playing with it in her bedroom when she couldn’t see me, when I stayed overnight after the opera.”

From these early experiences in Melbourne, he eventually made his way to Vienna in 2001 as artistic director of the Schauspielhaus. There, he says, he felt “the ghosts and haunted, unresolved dybbuks of Viennese anti-Semitism every day – it’s in the tap water in Vienna.”

But for the past seven years he has been able to breathe easier in the German capital.

“Berlin has always welcomed outsiders,” the Melbourne native says of the European city he once described as a collection of shtetls. “Because the tradition has been destroyed a few times or has been divided, scarred and mutilated, the tradition is then constantly being reinvented in a very interesting way. Which makes it, of course, an ideal breeding ground for people to come and feed off.”

The first non-German at the helm of Berlin’s niche operetta theatre, the Komische Oper, Kosky has certainly used his perspective as an outsider to reinvent tradition, starting with revising the company’s practice of performing only works written in or translated into German.

Kosky says of the Abraham work, a “huge jazz operetta … written by a Hungarian Jew”, that his season was the first time the piece had been performed in Berlin since the premiere in 1933.

“Because it was banned six months later, this was the first time that anyone in Berlin had heard or seen the piece since 1933, and I was quite shocked that no one had done it in over 70 years,” he says.

“The reason is that it needs an Australian to come and present it,” Kosky insists. “No German would ever think of doing it. And I’m very proud that I could resuscitate pieces like that, and present them back to the German audiences, not as some guilt project but as part of German culture.”

There is also a sense of coming full circle with Ball im Savoy, unearthing music banned during the Third Reich in a theatre taken over as part of the Nazi Kraft durch Freude program before sustaining damage in allied bombings.

Another Jewish composer, Leonard Bernstein, features in the 2013-14 season with Kosky’s extravagant production of the crowd-pleasing West Side Story, with dialogue in German.

“We do it on a scale that no commercial theatre or opera house can do it,” he says proudly. “West Side Story has an orchestra of just under 60 musicians, which no commercial theatre can ever afford, so it sounds completely different. There is also a chorus so there are 50 people on stage.”

This is where some of that ‘Glück’ from the company slogan comes in – in the form of gelt.

“That’s what you can do in a subsidised German opera house that you could never do in Australia. I’m very interested in the scale of the pieces,” he says.

“Germany is paradise for art subsidy. It’s a very privileged environment to work in. We are the smallest opera house in Berlin and our annual subsidy is 30 million euros, and only 15 per cent of our budget comes from sponsorship and box office. It means you can create work on a scale and of a quality you can only dream of in countries like Australia.”

I saw the scale of these no-holds-barred productions when I attended the 2013 revival of Orpheus, the first in the 12-hour Monteverdi trilogy with which Kosky launched his intendancy, and the product of “three very hard, long, difficult, fabulous years” collaborating with Australian composer Elena Kats-Chernin on her klezmer-tinged arrangements of the original 17th-century operas.

During the wedding celebration scene, I realised that I had never seen so many people on stage in any opera. Shaggy-legged satyrs strutted alongside scantily clad nymphs whose cascading tresses nonetheless failed to cover their bare breasts as they danced. In the audience, I found myself next to one of Kosky’s high-school teachers from Australia on the left; on the right, a strange man who told me he takes the puppet seated on his knee to watch every concert he attends.

He’s not the only one who thinks so – in 2013, 50 critics declared the Komische as Opera House of the Year in the magazine Opernwelt, a nod of approval to the incumbent Australian director.

Earlier this week, at the second annual International Opera Awards held in London, Kosky won the award for best director over a top class field from around the world.

Kosky is settling in for a long stay, then. “I feel as if I understand the spirit of Berlin. I have an interesting and productive and creative dialogue with the city. My heart and soul is in Europe and not in Australia, and I would never live in Australia again.”

Kosky flies in for a chat

AS part of the Melbourne Theatre Company’s 2014 Neon Festival of Independent Theatre, five independent theatre companies will stage new works between May 29 and August 3.

Neon will also feature a program of free events including an exclusive keynote conversation with director Barrie Kosky, who is making a special visit to Australia.

Kosky will discuss a wide range of arts issues with ABC Arts critic Alison Croggon on Sunday, July 20 at the Sumner Theatre, Southbank at 2pm.

Seats are limited for this free event and bookings are required.