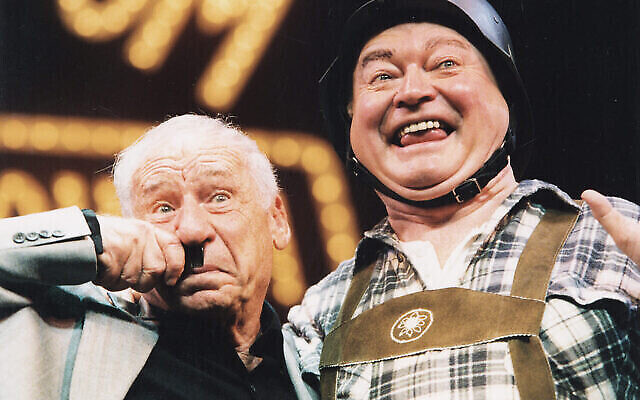 Mel Brooks (left) with Bert Newton at a media conference ahead of the premiere of The Producers in Melbourne in 2004. Photo: AJN file/Peter Haskin

IT seems just about everybody knew Bert. The TV, radio and theatre star with the rapier wit, the manicured coif and a grin as broad as the entrance to Luna Park, was a mainstay of the culture, dating from his 1950s radio days.

Bert Newton was part of the fabric of Melbourne, and more widely of Australia – he appeared live in our living rooms as the sidekick of TV comperes Graham Kennedy and Don Lane so many nights a week for so many years, it felt like he was part of the mishpachah.

So when he left us last Saturday, many felt as if they had lost someone close.

Newton was Catholic, but he had an impressive array of Jewish associates throughout an epic career.

Tributes from Newton’s Jewish colleagues flowed this week, and The AJN spoke to a production manager for whose son Newton had recorded a bar mitzvah tribute, a pianist who had discussed keeping kosher with Bert on TV, and a teacher whose father had been Newton’s tailor.

They remembered a great Australian public figure who always took the time to say thanks to those who assisted him, who understood implicitly that small kindnesses and courtesies mattered.

Newton was a mensch. He had empathy – and it showed, not just in his laserlike lock on our funnybones, but when the subject matter was grim and horrendous.

In 2005, on his Good Morning Australia program, Newton movingly interviewed Sydney Holocaust survivors Harry Fransman and Olga Horak in a segment on the Sydney Jewish Museum.

But in the end, it will be the jester who will be remembered. He proved himself again and again to be zany and outrageously funny.

His humour typified an era in Australian culture that’s been transforming, and a tiny handful of his gags might nowadays draw a politically correct wince, a point made in social media after Newton, a four-time Gold Logie winner, briefly appeared on stage during the 2018 TV Week Logie Awards presentation.

But without any doubt, all of Newton’s material came from a man with a heart of gold.