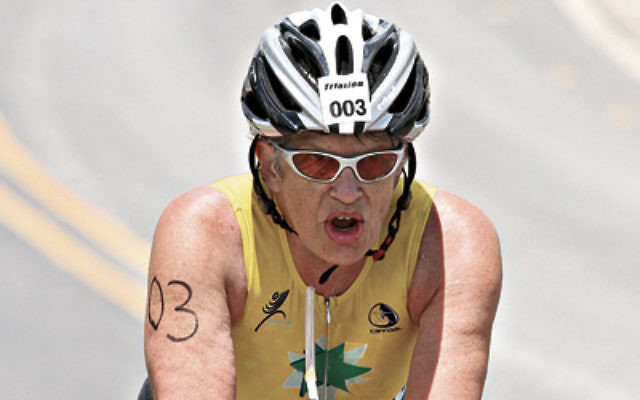 HAVING already left her mark on the triathlon world, five-time Maccabi Australia Masters Sportswoman of the Year Anne Besser recently turned her attention to open swimming with stunning results.

After representing Australia in triathlon and cycling events at several world championships and Maccabiah Games, Besser placed second in the 2.5km swim at the Pan Pacific Masters Games on the Gold Coast recently.

The 66-year-old told The AJN her silver medal in the 65-69 age group category, which took place in Lake Hugh Muntz, was hugely ­satisfying.

“I’m stoked, I really am,” Besser told The AJN. “There weren’t a whole lot of swimmers in my category, but a medal is a medal and I still beat the other people.”

The masters athlete raced in her maiden open swimming event over 2.5km, after previously competing in races only up to 2km.

Her 1:12.20 swim was a great time considering the conditions, with high winds and choppy water buffeting the competitors.

“The conditions were shocking,” Besser said. “Everybody’s times were down, … so I’m pleased with [mine], because I was just 12 minutes off my 2.5km pool time.”

A recurring back injury and several other issues have caused the champion veteran to give up running, leaving her to focus on cycling and swimming.

“I just can’t run anymore with my back,” Besser said.

“But I am going to do cycling and swimming still and hopefully go to the World Masters Games next year after Maccabiah.”

Besser won two gold medals in the cycling events at last year’s Australian Masters Games in Adelaide and has previously won several medals at Maccabiah Games in the past.

And with the next instalment of the Games coming up in July next year, she will lead the triathlon team to Israel.

“I’m over the moon to be able to take the best team ever to Israel,” Besser said.

“I competed on the same course in 2009 so I have the knowledge.

“It’s going to be awesome, because I think at least four of my athletes will win gold.”