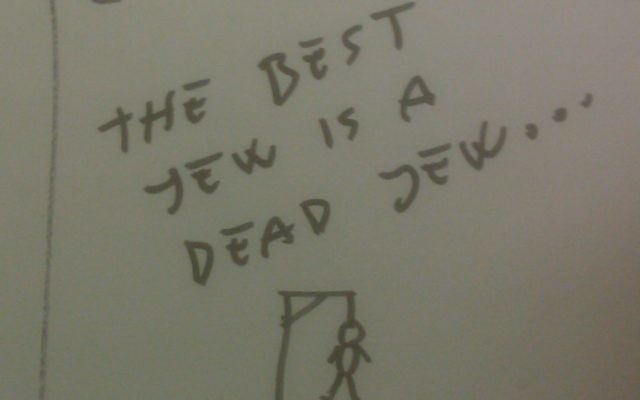 “The best Jew is a dead Jew,” read the paint scrawled in the bathrooms at the Wantirna Trash and Treasure Market.

The picture of a hanging stick figure was discovered last weekend and reported to the ADC first thing on Monday morning. After speaking with the market’s management, ADC arranged for the graffiti to be painted over.

ADC chairman Anton Block said there had been an increase in cases of anti-Semitic graffiti in Melbourne over the past six months and it was essential the community had an organisation that could act quickly to have this material removed.

“We know graffiti prompts copycat crime when it hangs around. Owners of private property are generally agreeable to removing it when asked by ADC, but they don’t get around to it otherwise.

“We need to be active and vigilant, and be aware that unfortunately the people who hate us are out there, and we need to defend ourselves.”

He said every week ADC dealt with cases of Jews being abused, threatened or subject to prejudice.

ADC executive director Deborah Stone said cases were filed and reported to the police at the end of each month.

“When graffiti is found, there is no way they can track down the perpetrator,” she said.