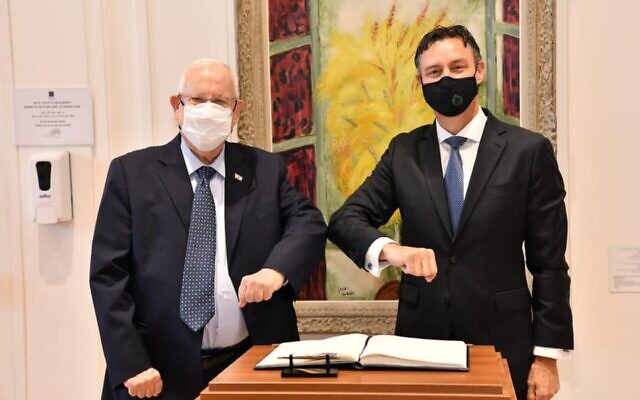 ISRAELI President Reuven Rivlin told Australia’s new ambassador to the Jewish state Paul Griffiths (pictured, right) that Australia is “one of the best friends Israel can have”.

The comment came in a meeting between the pair last week in which Griffiths, who was announced in October as Australia’s next ambassador to Israel, officially presented his credentials to the President.

Speaking to The AJN this week, Griffiths said Rivlin hailed “the warmth of the Australia-Israel relationship”.

Posted by Australian Embassy in Israel on Wednesday, November 11, 2020

“I have been warmly welcomed in Israel. It is clear that Israelis feel a strong connection to Australia, which is supported by the active Australian Jewish community. I look forward to meeting more people in person when it is safe to do so,” he said.

On the long-running Malka Leifer extradition process, which returns to court for an appeal next month, Griffiths said the President assured him the case “would soon be resolved”.

He added, “Our primary priorities at the moment are to stay COVID safe and look after Australians seeking to return home.

“We have made much of our work virtual, including our government meetings, business sector engagement and public diplomacy and look forward to in-person meetings again as soon as we are able.”